Higgins on Brexit: 'our nearest neighbour is throwing a tantrum' 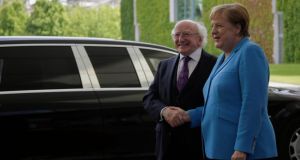 President Michael D Higgins has described the UK’s departure from the European Union as Ireland’s closest neighbour having a “tantrum”.

The President was speaking in Berlin on Wednesday at the start of a three-day state visit to Germany, on which he is being accompanied by his wife Sabina and Tánaiste Simon Coveney.

Mr Higgins was received with military honours at Bellevue Palace in Berlin where his German counterpart Frank Walter Steinmeier said he hoped the next British prime minister will be motivated by Brexit realities rather than “fantasies”.

Mr Steinmeier said Ireland “need not worry” about Germany’s support in this critical period because Berlin had “always stood firmly at Ireland’s side”.

“We know the Border issue . . . is not just a problem for your country, we have to see it as a European [problem] and we will continue to do that, so you can be assured of our ongoing solidarity,” said Mr Steinmeier, adding that Berlin was in “full agreement” with Dublin.

Looking to London, and the Tory leadership contest, the German president added: “I hope there is no increase in the fantasies of people who support a no-deal Brexit, and that those who have secret sympathy for this variant don’t overlook the consequences”.

Mr Higgins said he was “very grateful and reassured” to have the support of Mr Steinmeier and the German federal government on Brexit and the Border.

“The solidarity offered to our island at this difficult time is deeply appreciated and will help to contribute to the bedrock of our shared European journey.”

After holding talks, the two presidents urged the EU institutional leaders to expedite work on pressing issues beyond Brexit. They also committed to closer bilateral co-operation on issues of joint interest such as human rights, climate change and migration as well as the United Nations and multilateralism.

Later, during lunch at a two-star Michelin restaurant hosted by Bord Bia, Mr Higgins said he hoped that Irish food exports would not be adversely hit “as our nearest neighbour continues to throw a tantrum”.

Later at a state dinner, Mr Higgins recalled a millennium of colourful personalities in German-Irish relations – from Sligo-born Lola Montez, whose affair with Bavaria’s King Ludwig I cost him his crown in 1848, to Berlin-born sculptor Imogen Stuart, who settled in Ireland in 1951.

“While we speak a different language, we share values and principles which allow us to speak with a resonance and respect, not only on the fundamentals we agree, but on the nuanced differences we can equally discuss,” he said.

In his toast, Mr Steinmeier joked that he was “somewhat jealous” of Mr Higgins’ popularity, whether cheered by the “big men of the Irish rugby team” or immortalised as a tea-cosy.

He said his country had much to be grateful to Ireland for, from taking in hundreds of children during the first and second World Wars to assisting with the road to unification of Germany during the 1990 Irish EU presidency.

“For all of that we Germans are – and remain – thankful to you,” he said.

Mr Higgins extended an invitation to Mr Steinmeier to visit Ireland, which he accepted.

During the first visit of an Irish president to Germany since 2008, Mr Higgins visited the Brandenburg Gate, a Cold War frontier until 30 years ago, with Berlin’s mayor, Michael Müller. The President later laid a wreath at the Neue Wache memorial while a soldier played a rendition of Der Gute Kamerad (The Good Comrade).

In the afternoon, Mr Higgins paid a courtesy call on chancellor Angela Merkel. Pulling up in a 6.6m bulletproof Maybach – just delivered to the German government – the chancellor teased her guest in English: “Impressive car, a chancellor doesn’t get anything like that.”

Over at the Bundestag, in the middle of a packed schedule, parliament president Wolfgang Schäuble offered his Irish guest an afternoon coffee pick-me-up. Mr Higgins said he was fine: “I keep moving, you see.”

On Thursday the state visit continues in Leipzig with Mr Higgins delivering a keynote address about the future of Europe and an “Other Voices” concert in Berlin.