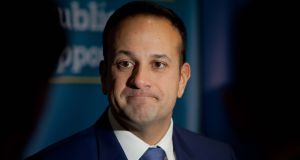 Taoiseach Leo Varadkar said the Sinn Féin leader was ‘setting the scene to ensure someone else is getting the blame’ over the impasse in Northern Ireland. Photograph: The Irish Times

Taoiseach Leo Varadkar on Wednesday called on the Sinn Féin leader to “stop blaming everyone else” for the failure to form a Northern Ireland Executive.

The Taoiseach said Sinn Féin needed to compromise in the same way Fine Gael had “to make many compromises to form the last two coalitions”.

Mr Varadkar said Sinn Féin should make the compromises and not look for cover for them. The party should “make them, own them and defend them and don’t try to spread the blame”.

In sharp and testy Dáil exchanges, Mr Adams claimed Government sources had briefed media that Sinn Féin’s leader in the North Michelle O’Neill had done a deal with the DUP but it had been blocked by senior members of the party, and that she and MLA Conor Murphy had been left “out to dry”.

Mr Adams said Ms O’Neill was a senior member of the party and claimed the Government source briefing was untrue, malicious and shameful.

Mr Varadkar in turn claimed the Sinn Féin leader was “setting the scene to ensure someone else is getting the blame” for the failure to come to an agreement on the North.

Mr Adams said his party’s endeavours were to have the institutions in place and functioning properly as quickly as possible.

He said the talks process was slow because of the resistance to change in elements of political unionism. Mr Adams claimed those “stubborn elements are being humoured by the British government in denying citizens their rights, and the Taoiseach is tolerating it”.

The Louth TD said the talks were about implementing existing agreements that had been broken and the implementation of rights including equality and identity.

The Sinn Féin leader accused the Government of briefing against Sinn Féin in parallel with the British government’s briefing, which was more “temperate”.

The Taoiseach said he had no difficulty in speaking for himself and did not need to account for media briefings.

Mr Varadkar said he had no knowledge or interest in the internal politics of Sinn Féin, and what was required was for Sinn Féin and the DUP to come to an agreement to get the institutions up and running.

The Taoiseach said Mr Adams was criticising “shadow briefings” but was doing the same himself when he talked about “stubborn elements in political unionism”.

He added: “This sounds like somebody who has already given up and is trying to spread the blame to others.”

Northern Ireland could be the area in the European Union most affected by Brexit, but there was no representative from the North for discussions, Mr Varadkar said.

He said parties in the North were allowing the money to run out and paving the way for direct rule from Britain.

The Taoiseach told him to make the necessary compromises and “don’t try to spread the blame”.