A political digest with Sarah Bardon 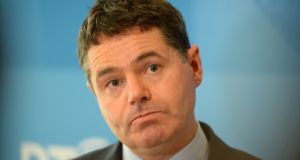 Such treatment by the banks has been known to the Central Bank, the Department of Finance and others for years. Photograph: Dara Mac Donaill / The Irish Times

This morning’s Irish Times leads with the ongoing controversy surrounding the tracker mortgage scandal and the worrying confirmation that we do not know the full extent of the problem.

The paper reports how Allied Irish Bank may owe money to thousands of additional customers, on top of the 3,200 people we were aware of.

The Government is determined to resolve the matter for the tens of thousands of people affected. One cannot help but be slightly sceptical of the tough language from Government Ministers in recent days and their newfound commitment to this issue. This did not come as news to them. Such treatment by the banks has been known to the Central Bank, the Department of Finance and others for years.

This only warranted political action when the Oireachtas committee on finance put faces to the thousands of cases involved.

For me, one of the most striking aspects of this debacle is the 7,000 customers who have no idea they are at the centre of this matter.

It should not be forgotten that such decisions were made at the highest levels of the banks to underpin their profits. In response, Taoiseach Leo Varadkar announced Minister for Finance Paschal Donohoe would bring in the banks to give them a ticking off.

Donohoe and Varadkar threatened the institutions with all sorts including increased taxation and higher bank levies but in reality, they hoped and knew it would never take such action.

There is an inescapable feeling that banks are above accountability and transparency in this country. The lessons of the crash have yet to be learned.

The Government, like the last, appears to be willing to allow the institutions conduct their business without fear. And again, it appears willing to only take action when it becomes a crisis.

It was a scare before break-time but Micheal Martin did not succeed in cancelling the recess for TDs and Senators.

Martin advised his Fianna Fail frontbench of his plan to object to the Dail and the Seanad taking a week off at a meeting yesterday morning.

It was met with audible laughter but Martin insisted the House was not functioning and the holiday was not justified. He raised it in the Dail too but the rest of the House agreed the week off should proceed as planned.

This was not the only thing Martin said at the frontbench meeting. He also claimed Leo Varadkar and his Fine Gael colleagues were trying to goad the party into calling a general election.

He is probably right. Professor Tim Bale rightly pointed out recently the party which causes the general election may suffer at the ballot box.

All the polls indicate it will be a tightly fought contest between Fine Gael and Fianna Fail. Neither can afford to lose votes along the way.

The Oireachtas committee examining the eighth amendment will hear the challenges in legislating for abortion in cases of rape.

ICYMI: Cliff Taylor’s piece on the tracker mortgage issue is a must-read.

The Mirror reports on comments by Bertie Ahern on a possible Presidential run.

Dail: Dail begins at 10am to discuss the Finance Bill and statements on the National Planning Framework.

Leaders’ Questions begins at 12 followed by Questions to the Taoisech.

Richard Bruton takes questions at 3.30pm in his role as Minister for Education.

At 6.30, the Dail will debate the tracker mortgage controversy and a motion from Fianna Fail.

Government Business will continue this evening and the Dail will adjourn at 10pm.

At 3pm, the Minister for Foreign Affairs Simon Coveney is to address the ongoing situation in Catalonia.

Labour has Private Members on the gender pay gap and the requirement to publish such information. That will be debated at 6pm.

Fianna Fail TD Michael McGrath, the Irish Mortgage Holders Organisation and the Insolvency Service of Ireland are before the Oireachtas committee on Justice at 9 to discuss the Mortgage Arrears Resolution Bill.

Interesting discussion scheduled at 9.30am with Children and Youth Affairs. Cyber Security for children will be discussed with representatives from An Garda Siochana and the Office of Internet Security; and CyberSafe Ireland.

Eighth Amendment of the Constitution (Joint) is at 1.30 p.m.

Housing, Planning and Local Government (Select) is at 4.15 on the Water Services Bill.

ALSO: Dr David McCullagh will launch his book on DeValera in the National Library tonight at 7.30pm. Taoiseach Leo Varadkar is the guest of honour.