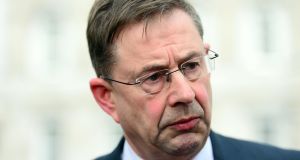 Fianna Fáil TD Éamon Ó Cuív called for legislation to be introduced to deal with legal difficulties for the repatriation of Irish prisoners from abroad. File photograph: Eric Luke

Questions have been raised in the Dáil about the Government’s plans to deal with the 32 Irish prisoners abroad seeking to serve their sentences in Irish prisons.

Fianna Fáil’s Éamon Ó Cuív said Ireland should be “equally anxious” for those prisoners to come home as people were for Ibrahim Halawa.

He joined in the words to welcome home Mr Halawa, who returned from Egypt after more than four years in prison in Cairo.

But Mr Ó Cuív said that Irish prisoners had been coming home at a rate of about six a year until there was a difficulty in the courts in 2014. Last year only one person was repatriated, he added.

Minister for Foreign Affairs Simon Coveney said however it was important to point out that Mr Halawa’s case was different “because we had to wait until it was concluded and there was a verdict”.

Mr Ó Cuív said it was “very appropriate to be asking the question” on the day Mr Halawa returned home.

“Surely we should be equally anxious for them to come home,” he said.

He called for legislation to be introduced to deal with legal difficulties for the repatriation of Irish prisoners from abroad.

“When will the Transfer of Sentenced Persons and Transfer of Execution of Sentences Bill, which has been on the legislation programme for years, come before the Dáil in order to facilitate the repatriation of people incarcerated abroad to our country?,” he asked.

The Minister said Mr Halawa “was found innocent of all charges. Therefore, he is a free man and an innocent man. He is not somebody who is incarcerated and needs to be brought home potentially to serve a sentence in Ireland or anything like that.”

He acknowledged that Mr Ó Cuív was making a “fair point” and said he understood work on the legislation was ongoing.