Impossible to say when Apple back taxes will be collected, Donohoe says 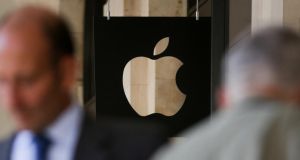 Apple back taxes: the tech giant had cash reserves of $261.5 billion, or €223 billion, in early July. Photograph: Daniel Leal-Olivas/AFP/Getty

The Government cannot say when Apple will pay it €13 billion in back taxes, Minister for Finance Paschal Donohoe has told the Dáil.

The European Commission recently served Ireland with notice of legal action for failing to collect the money, which Apple owes under an EU ruling delivered more than a year ago. Apple and the Government are appealing the original decision that the taxes are due, but the Government is still obliged to collect the money. It will then be put in an escrow account, where it cannot be touched pending the outcome of the appeal, which could take up to six years.

Mr Donohoe said in the Dáil on Tuesday that it was impossible to say when Apple would transfer the taxes because of the complexity and commercial sensitivity of the issue. He said that the Government was going through a procurement process to manage the escrow account and was in discussions with a company. He did not identify the company, however, and a spokesman later declined to comment. The procurement process is understood to be at an early stage, and the money may not be paid before the end of the year.

Mr Donohoe criticised the European Commission’s enforcement action, which was announced in Brussels earlier this month; he said governments normally have two years to comply with such rulings. The commission believes Ireland is guilty of foot-dragging in collecting the Apple taxes.

After last year’s ruling the Government said it would collect the money, plus interest, and hold it until the legal process was complete. It was originally given a deadline of early January – nearly 10 months ago. Mr Donohoe said on Tuesday that it would be collected “as soon as possible” but that it needed to be clear how the account would be operated.

Asked by Fianna Fáil’s finance spokesman, Michael McGrath, why he couldn’t collect the money, Mr Donohoe said that it was because the issue was “so sensitive” and because of the scale of the sums involved – the amount paid into the escrow account would be “the largest of its kind in the world”.

Between €13 billion and €15 billion will be drip-fed into the escrow account being set up by the National Treasury Management Agency, according to tendering documents released recently. Most of it will be held not in cash but in bonds, similar to the method Apple uses for its own cash hoard, which stood at $261.5 billion, or €223 billion, in early July.