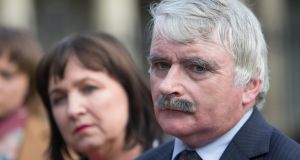 Speaking during an interview on RTÉ’s Morning Ireland Ms Doherty said the pensions issue was not discussed in Budget negotiations with Fianna Fáil, despite an assertion by Fianna Fáil’s Finance Spokesperson Michael McGrath that Dara Calleary had discussed the matter with Minister for Finance Paschal Donohoe.

Fianna Fáil could not be trusted, she said, given that they “took credit for everything else in the Budget”.

Later Taoiseach Leo Varadkar confirmed the issue had indeed been raised in talks with Mr Donohoe.

“The remark from the Minister for Social Protection this morning about Fianna Fáil not being trustworthy, that doesn’t help government cohesion and that is why I am asking her, in a reasonable manner, to correct the record in that regard. She was happy enough to trust us to vote her in as a Minister,” said Mr O’Dea.

He said the Dáil debate tonight is an “opportunity” for Ms Doherty to apologise.

The Dáil will debate a Fianna Fáil motion condemning the pension rules that reduce the entitlements of workers, especially women who took time out of the workforce.

Mr Varadkar yesterday defended the Government’s decision to the Fianna Fáil motion warning against a change being made “in isolation” to the pensions system.

He said amendments should be comprehensive, “so we don’t create new injustices”. The motion will likely be carried, although this will not compel the Government to act.

Mr O’Dea also accused Sinn Féin of presiding over “starvation” levels of social welfare rates in Northern Ireland and said they had no moral authority to criticise Fianna Fáil on the issue.

“We have been doing our utmost to maintain a stable government in the national interest,” Mr O’Dea said.

Mr Varadkar told the Dáil on Wednesday that Fianna Fáil did raise the pensions anomaly with Government Ministers in the pre-budgetary discussions.

Mr Varadkar told the Dáil on Tuesday Fianna Fáil had not raised the issue with him but nor had any other party, although he did not know if it was raised in talks with the Minister for Finance.

In the Dáil on Wednesday he said “the matter was not raised with me personally but I can confirm that the matter was raised briefly in discussions between spokespeople in the run up to the budget”.

He added: “However it was not put down as a priority measure because the priority was the €5 across the board for disabled people, widows, blind people, pensioners.”

Sinn Féin leader Gerry Adams said that people losing out because of the pensions anomaly could not afford the €30 it was costing them each week. But €30 was the price of a “decent bottle of wine or some such little ornamentation for the Cabinet”.

But the Taoiseach rounded on him and said he “neither understands the policy issues the Government is grappling with nor does he understand his own party’s policies”.

Mr Varadkar said “it’s not unsuprising that he thinks a bottle of wine costs €30.”

He added: “ I know the Deputy likes to travel first class whenever he can find someone to pay for him”.

The Taoiseach said “it’s some bottle of wine that costs €30.