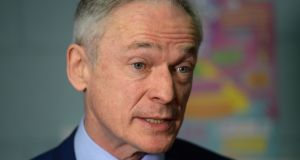 Minister for Education Richard Bruton said he would be encouraging teachers, the majority of whom retired before the age of 60, to return to teaching. Photograph: Dara Mac Dónaill.

The current starting pay of a new teacher will rise from € 35,958 to € 37,692 from October 2020 and this is a “very competitive salary”, Minister for Education Richard Bruton has said.

As teachers from the Teachers’ Union of Ireland (TUI) held lunchtime protests outside their schools on Thursday, Mr Burton said the agreements on pay restoration for new teachers had restored 75 per cent of the pay difference for newer teachers.

Mr Bruton pointed out that more than 5,000 extra teachers had been hired in the last two years, more “than at any other point in the State’s history”.

He told Independent TD Séamus Healy that there was a process in place to resolve the issue of pay inequality among teachers “over time”.

Mr Healy said the number of applicants to the post-graduate courses to qualify for secondary level teaching had “collapsed” by 62 per cent in the past five years from 2,842 in 2011 to 1,068 last year.

He said the combination of salary scale, conditions of service and career prospects are deficient.

But, Mr Bruton said: “I assure the Deputy that the number of students graduating as teachers is stable”.

The Minister also said that he would be encouraging teachers, the majority of whom retired before the age of 60, to return to teaching, while student teachers in their final year of study “can be considered for substitution”.

Mr Bruton told Independent TD Maureen O’Sullivan that his department was suspending the restrictions on substitution limits for teachers standing in for those on career breaks in the current school year.

He also stressed the career break scheme “is not for purposes such as switching career”, but for “personal development, voluntary service overseas, to accompany a spouse or partner on a diplomatic or military posting, for education, public representation, child care or dependent care, and self-employment”.

Schools were told the “welfare and educational needs of the pupils shall take precedence over all other considerations”.

Ms O’Sullivan pointed to the deadline on Thursday for applications for career breaks. She said some school boards of management were “dreading” their February meeting where they would have to decide on career breaks.