Many in Leinster House unnerved by 12 weeks proposal 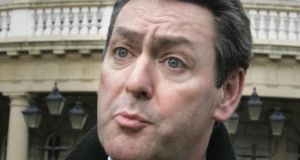 Billy Kelleher: supported by colleagues Lisa Chambers TD and Senator Ned O’Sullivan, he tabled a motion recommending the committee propose terminations up to 12 weeks without restriction

“A step too far” – those are the words repeated by politicians opposing unrestricted access to abortion up to 12 weeks into pregnancy.

Taoiseach Leo Varadkar introduced the phrase at a press conference in early January, and it has become the mantra of TDs and Senators struggling to align themselves with either side of the debate.

The “12 weeks” proposal was definitely a step that seemed unimaginable five months ago when the Oireachtas Committee on the Eighth Amendment began its deliberations.

Many of those on the committee, and indeed those observing its work, had anticipated an entirely different outcome. There was a widely-held expectation that the committee would recommend legislating for abortion in certain circumstances including rape, incest and fatal foetal abnormalities. That remained the belief until the members neared towards the end of their work.

However, the evidence they had heard was quite clear. Legislating for the cases of rape and incest would, in the words of assistant professor of law at Trinity College David Kenny, be “unworkable”.

Tom O’Malley, senior law lecturer in NUI Galway, told the committee “nothing short of a criminal conviction by a court would suffice to prove that the rape has been committed”.

He offered a legal alternative, stating such legislative difficulties would be avoided in the “event that abortion as freely available for the first three months or whatever the period may be”.

There are also psychological consequences, and the circumstances in which a young person might choose to obtain tablets from a source she does not know

The committee had also heard of the availability of abortion pills, and the thousands of women who are accessing them through the internet.

Dr Peter Boylan, chair of the Institute of Obstetricians and Gynaecologists, told the committee the “genie is out of the bottle in respect of online access to the abortion pill”.

Prof Fergal Malone, master of the Rotunda, expressed concern about women using medication, and the potential harm caused by the lack of regulation of the pills. Women do not know what they are taking, he said.

Dr Rhona Mahony, master of Holles Street, agreed. “It is not just the physical consequences. There are also psychological consequences, and the circumstances in which a young person might choose to obtain tablets from a source she does not know and take them with all that risk, and why she is doing that on her own without accessing good medical care.”

The evidence presented pointed against the possibility of legislating for abortion in cases of rape, incest and fatal foetal abnormalities, but politically it would have been an easier sell. Most politicians outside the committee room had expressed their support for this type of proposal.

There is no practical way to stop the use of abortion pills in Ireland. That horse has bolted... We can either close our eyes to this, as usual, or actually deal with the dangers

However, Fianna Fail TD Billy Kelleher changed the course of the debate. As the committee reached its final conclusions, Mr Kelleher, supported by his colleagues Lisa Chambers TD and Senator Ned O’Sullivan, tabled a motion recommending the committee propose terminations up to 12 weeks without restriction.

There were many pro-choice TDs on the committee who favoured such a position. However, the fact that three Fianna Fáil members had suggested it indicated how dramatically the debate had shifted over the course of the committee hearings.

Fine Gael TD Hildegarde Naughten, who had entered the committee hearings defining herself as anti-abortion, found herself supporting the measures also. She outlined her rationale for changing her mind.

‘That horse has bolted’

“There is no practical way to stop the use of abortion pills in Ireland. That horse has bolted...We can either close our eyes to this, as usual, or actually deal with the dangers of unsupervised access to abortion pills. I choose the latter.”

The committee’s decision unnerved many within Leinster House. Some are still seeking what they term a more balanced approach, allowing for abortions in certain cases. As the referendum campaign begins those politicians advocating change will be under pressure to outline how they could legislate for terminations in the particular instances they refer to.