Government will not finalise wording before ‘unborn’ ruling 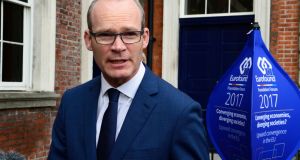 Tánaiste Simon Coveney: played down divisions over how to legislate for abortion, saying there was more agreement than disagreement on how to proceed. Photograph: Cyril Byrne

The Government will not finalise the wording of the abortion referendum until after the Supreme Court rules on an appeal from a High Court case on the rights of the unborn later this month.

According to sources familiar with Government discussions, Ministers believe they must await the Supreme Court’s ruling before finalising the wording. The court’s judgment could impact on the wording for the referendum because it concerns the meaning of “unborn” in the Constitution.

“This is the first time in the history of the State that the Supreme Court will rule on the meaning of unborn,” a source familiar with the Government’s legal advice on the matter said. “The wording is known. But the worst thing we could do is publish it and then have to change it because of the judgment.”

The case is listed for February 22nd and is expected to take two days, legal sources say. A judgment is expected in the following weeks.

The case was brought by a Nigerian man who was facing deportation, his Irish partner and their then unborn child.

In his judgment, delivered last summer, Mr Justice Richard Humphreys held that “unborn” meant an “unborn child” with rights extending beyond the right to life under article 40.3.3 (the Eighth Amendment).

Protection to all children

He also interpreted article 42a of the Constitution, inserted as a result of the 2012 Children’s Referendum, as affording protection to all children “both before and after birth”.

The State filed notice of appeal before Christmas, but the Supreme Court has expedited the hearing on account of the forthcoming referendum.

Meanwhile, Taoiseach Leo Varadkar has said that there should be “no foreign funding” of the groups campaigning in the abortion referendum.

At a press conference with the Estonian prime minister, Yuri Ratas, Mr Varadkar said: “The rules that apply to referendums are there and certainly one thing that is significant, and one thing we’ll have to watch, is to ensure that there is no foreign funding of either campaign.”

Amnesty International, which has been campaigning for a change in Ireland’s abortion laws, has been told by the Standards in Public Office Commission to return a €137,000 grant from an international donor. Amnesty has disputed the decision and refused to return the money.

Meanwhile, Tánaiste Simon Coveney played down divisions in the Cabinet over how to legislate for abortion, saying there was more agreement than disagreement on how to proceed.

Speaking in London, he said there was unanimity at this week’s Cabinet meeting in favour of repealing the Eighth Amendment.

“I believe the status quo in terms of how we treat women with a crisis pregnancy in Ireland is totally unacceptable and should change, and I hope the Irish people will support that change,” he said.

“I believe that this issue is too complicated to attempt to deal with it in a written constitution and so I believe that the Dáil and Seanad should legislate for this difficult and complex and very emotive issue in Ireland. And this Government wants to do that.”

Mr Coveney said there were “some differences of opinion in terms of the content of that legislation but there’s a lot more agreement than there is disagreement, I can assure you”.

Meanwhile, Mr Varadkar told the Fine Gael parliamentary party meeting they would be given a clear indication of what abortion legislation the Government was proposing at the beginning of March.

Mr Coveney, Minister for Agriculture Michael Creed and chief whip Joe McHugh are among those within Fine Gael to oppose the proposal to allow for terminations up to 12 weeks into a pregnancy.

'Beautiful soul with bright career ahead' – tributes paid to stabbed teenager 17:46
Tourism sector calls for international travel to resume in second half of 2021 17:29
Most water extraction to go unregulated, environment groups warn 17:22
Woman sues Facebook over hacking of her account 16:59
Zero Covid strategy must be adopted to avoid recurring lockdowns – scientists 16:53