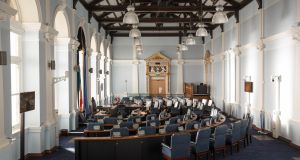 An Oireachtas committee with an eight-month mandate to consider the Manning report on Seanad reform is to be set up, Taoiseach Leo Varadkar has announced.

The report, drawn up by a working group chaired by Dr Maurice Manning, chancellor of the National University of Ireland and a former Fine Gael Seanad leader, was published in 2015.

Its recommendations included the extension of the vote to all Irish citizens, including emigrants and residents of Northern Ireland, in Seanad elections.

“I want to give reform a chance and I want to see what we can do to implement, on a phased basis, the Manning recommendations,’’ said Mr Varadkar.

The report also recommended that 30 of the 60-member Seanad should, in future, be elected by electoral suffrage, with all holders of Irish passports entitled to vote.

The Taoiseach would continue to appoint 11 members, the report added.

In his first address to the Seanad as Taoiseach on Thursday, Mr Varadkar siad the committee would be made up of members of the Oireachtas, with the assistance of outside experts as appropriate. He said he would write to party and group leaders asking them to nominate members to the committee.

This would be done as soon as a chairperson, acceptable to all sides, was agreed, he added.

He said any changes agreed would be implemented in the Seanad election after the next one.

Mr Varadkar said he believed that in the 2013 referendum a majority of voters rejected the then government’s proposal to abolish the Seanad but they had not endorsed the status quo either.

“I believe they wanted reform,’’ he added.

He said he did not believe the Seanad had fulfilled its role as a revising chamber, nor as an independent voice, sufficiently in past decades.

1 Luke ‘Ming’ Flanagan bares his bottom half to European Parliament
2 Gardaí investigate Dublin Black Lives Matter protest over Covid-19 rule breach
3 Coronavirus: Eight further deaths and 10 new cases reported in the State
4 A third of arrivals in Ireland are not answering phone for self-isolation checks
5 Trump turns to bible for photo op as DC burns around him
Real news has value SUBSCRIBE