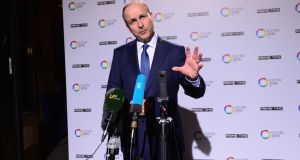 It has been a long five years for Micheál Martin, spent re-organising Fianna Fáil and trying to create a cohesive team from a malcontent, disappointed and small but exclusively male Dáil cohort. It is also a long road back to anything approaching the party’s numbers pre-economic decimation. However, his remarkable election campaign performance and the party’s favourable results stand as a tribute to him, particularly when he was a senior minister for 14 years in the coalition that landed the State with the troika bailout. But the battles are far from over and the key question will be on whether the numbers stack up for a Fine Gael/Fianna Fail coalition and will the party cross that civil war Rubicon. Another important factor in his future prospects is the number of Fianna Fáil women returned to the Dáil and what positions they will hold, given the internal controversy over gender quotas. Now 56, he first became a TD in 1989, served on the frontbench from 1995 and as minister for foreign affairs, health, education and enterprise. He is married to Mary O’Shea and they have two adult children. – Marie O’Halloran