Power would transfer from ‘unelected officials’ to ‘truly accountable’ politicians. 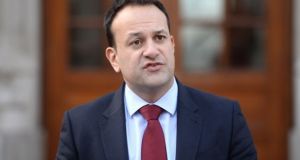 Dubliners will be asked in 2021 if they want to have a directly elected mayor depending on the outcome of a citizens’ assembly on the issue, Taoiseach Leo Varadkar has said.

As Limerick, Cork and Waterford prepare for plebiscites next month to decide if they want such an officeholder, Mr Varadkar said it was an important opportunity for these cities to “elected a mayor with real power and responsibility”.

The votes in the regional capitals will take place on May 24th, the same date as the local and European elections and if the electorate accept the proposal legislation will be introduced to allow such mayors take up office by 2022.

It would be a “big change”, he said to transfer power “from unelected officials to elected politicians truly accountable to the people”.

Mr Varadkar made the announcement in his annual speech to the Seanad.

He said work was underway to establish the citizens’ assembly to consider what type of local government structure and directly elected mayor, “if any”, would be appropriate for Dublin.

The Taoiseach also told the Upper House that citizens of the North will remain European citizens “in all circumstances”, after Brexit.

He stressed that “no matter what happens” the Government could provide reassurance to citizens in Northern Ireland.

70th anniversary of the Republic

Some 40 of the Seanad’s 60 Senators were in attendance for the Taoiseach’s address which occurred on the 70th anniversary of the Republic coming into effect.

The Taoiseach said the date may have been coincidental to his yearly address but he said the 1949 Act was an important stepping stone “in our State’s constitutional evolution” and part of the change in the relationship with Britain.

Mr Varadkar highlighted the Government’s Global Ireland to double Ireland’s global footprint by 2025 through initiatives including new embassies as “the most ambitious renewal and expansion of Ireland’s international presence since the foundation of the State”.

He said “we are working to deepen our influence within the EU, influence the debate on the Future of Europe, and diversify our trade with the wider world”.

In follow-up contributions Senators raised a number of issues. Fianna Fáil Seanad leader Catherine Ardagh highlighted the lack of Government in Northern Ireland and said civil servants were running the North with just “shouting and pontification from the main parties”, which had to stop before direct rule becomes a reality.

She also took a potshot at the Government over its attempts to guillotine debate on the Judicial Appointments Commission Bill.

Independent Senator Michael McDowell warned “the cart should not be put before the horse” in having votes for directly elected mayors. He said the crucial thing was to decide “what local government is about in this country”, its purpose and powers.

He also said it was imperative “when the dust settles on Brexit” that the Government “restores warm and positive relations with Downing Street”.

Sinn Féin Senator Niall Ó Donnghaile said Irish citizens born in the North were “only identified as Irish” but not accepted as Irish but were treated by “default” British citizens which he said was “in flagrant violation of the Good Friday Agreement”.

There were moments of humour including when Independent Senator David Norris called on Mr Varadkar to give an assurance that he would never again try to impose a guillotine, after his previous pledge never to do so, following the failed attempt to curtail the Judicial Appointments Commission Bill.

Cathaoirleach Denis O’Donovan said “everyone makes mistakes” and it was only one time in three years.