Brexit should be ‘aberration’ in discussion on NI peace, says Nancy Pelosi

US speaker praises John Hume’s role as peacemaker, on visit to Derry 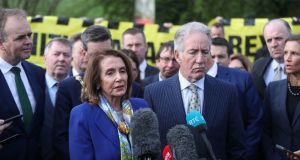 Speaker of the US House of Representatives, Nancy Pelosi, has paid tribute to John Hume’s role as a peacemaker during a visit to Derry.

Speaking in the city’s Guildhall, Ms Pelosi said Mr Hume, who won the Nobel Peace Prize for his role in the 1998 Belfast Agreement, was “revered in Congress” and was “a “tremendous influence to all of us”.

Ms Pelosi was among a US congressional delegation who visited the Border between Derry and Donegal at Bridgend, Co Donegal on Thursday.

The delegation then travelled to Ulster University’s Magee campus, where congressman Richard Neal was awarded an honorary degree for his contribution to peace and conflict resolution, and visited the Peace Bridge.

Ms Pelosi and the delegation were welcomed to the Guildhall by John Hume’s wife Pat and the mayor of Derry John Boyle.

In her speech to politicians and civic leaders, Ms Pelosi thanked the Humes for their contribution to peace.

“The Hume legacy is the Pat and John Hume legacy,” she said. “They’re such a team. Thank you so much for your leadership.”

Congressman Neal said Derry had been “so far ahead of the rest of the province because of the chances you took, and that was because of John Hume”.

“I remember coming here in a very different time,” he said, “and I bring that up because one of John’s favourite quotes was America, it was e pluribus unum – of many, one.

“It was consistent with John’s belief in agreement without uniformity.

“You are so far ahead of the rest of the province because of the chances you took, that was because of John Hume.

“It’s only one community but two traditions, and I think that’s what we want to embrace, the idea that we grow together, and the differences diminish.

“There can be no return to any sort of hard Border.”

The Belfast Agreement, she said, had served as “a beacon to the rest of the world”.

“Far be it from any of us to want that to be dimmed by anything that the Brexit conversations could bring down on the Good Friday accord, you just can’t do it.”

“We believe that Brexit should be just an aberration in this discussion as we continue to build and strengthen the peace that was generated by the Good Friday Accord,” she said.