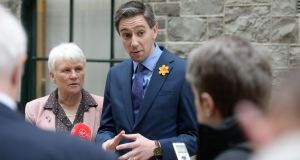 And Mundy, of course.

Thursday made her official debut in the Dáil on, strangely enough, Thursday afternoon. But she’s been a regular in that time slot since becoming a Minister of State in the Department of Health. Catherine Byrne is a Leinster House “supersub”, regularly pressed into action when fellow Ministers are unavoidably detained, gone home for the weekend or dodging unpopular answers. She even stands in for Ministers from other departments.

Health questions are difficult. A stock reply from a civil servant’s drawer sounds cold and uncaring when set against life-and-death issues.

Enter compassionate Catherine. And when TDs want to explode in frustration after yet another bland by-the-numbers reply on a health-related matter, they see the kindly deputy for Dublin South Central and all they can do is sympathise with her for having to come in and do her colleagues’ dirty work.

Her area is drugs and heath promotion.

Minister of State Finian McGrath has special responsibility for people with disabilities and their carers.

Minister for Health Simon Harris is in charge overall.

RTÉ has the Claire Byrne Show but Leinster House has the Minister Catherine Byrne show, every Thursday

He doesn’t come in very often for Topical Issues. He has three juniors for that job.

Sinn Fein’s Caoimhghín Ó Caoláin wasn’t surprised this week when Catherine rose to answer his question about ambulance personnel campaigning to be represented by the Psychiatric Nurses Association.

“Thursday is your day. RTÉ has the Claire Byrne Show but Leinster House has the Minister Catherine Byrne show, every Thursday, for topical issues,” smarmed Caoimhghín.

“I say that not in jest, I say that because it is wrong that the Minister himself has not presented to deliver his own script, and I have to say I’m exasperated . . .”

Fianna Fáil’s Eugene Murphy asked about the imminent closure of the Rosalie unit in Castlerea, Co Roscommon, which caters for people with mild mental health and disability issues.

He told Catherine, “you’re always pushed into these positions and I feel somewhat sorry for you. I mean, you’re here and you do your best to answer the questions, but I did at least expect that Minister Daly would be here.”

Earlier this month, when standing in for Daly on a question to do with nursing home services, the Ceann Comhairle joked: “You should be appointed Minister for Topical Issues.”

In February, Fianna Fáil’s Robert Troy expressed disappointment that Simon Harris wasn’t around to address his topical issue question on an MRI scanner for the Midland Regional Hospital.

“I had hoped the Minister would be here because you can bet your bottom dollar that when the project is finally announced, he’s not going to give you the job to announce it. He’ll come in and take that glory himself.”

Standing in for Finian McGrath in January, Catherine sighed: “There’s a song – I Don’t Like Mondays. I’m starting to not like Thursdays, to be honest with you.”

Catherine’s plight is not as cruel as it seems, although, unlike her departmental colleagues, the questions she has to answer are almost always outside her remit. A check of the Dáil record shows signs of a junior ministerial carve-up when it comes answering the daily “tropicals” (as they are called).

We must ask Tuesday McGrath and Wednesday Daly about this.

Money talk knocks the wind out of Mick’s sails

The Ceann Comhairle, in an attempt at levity, knocked the wind out of Mick Wallace’s sails on Thursday afternoon with a question which had everyone doing a double-take.

Seán Ó Fhearghaíl was in the chair for an interesting discussion on the Government’s new policy for international development. “A Better World” was welcomed by speakers on all sides, but there were thoughtful contributions on what Wallace called “the bigger picture” in terms of global poverty.

She recalled a fact-finding visit to Malawi where a cash-transfer system was operated. “It’s like the social welfare payment, there’s a mobile bank and what we were seeing was the local people, very poor people, being empowered. They had money into their hand and could use that. And, by Jeeny, did they use it, especially the women. Of course, once you give women money, they will do far more with it than men.”

Maureen ended with a quotation from Fr Joseph Wresinski, who founded All Together in Dignity – Fourth World, an international advocacy to overcome poverty. “His point was poverty is of man’s doing and man can destroy poverty.”

Mick Wallace was next.

As he was about to speak, the Ceann Comhairle looked up at him.

“How are you with money?” he enquired of the Wexford TD who almost lost his seat back in 2012 and had to apologise in the Dail after he was fined for the under-declaration of VAT to the tune of €1.4 million.

“How are you at managing money?” the Chair innocently repeated.

“Managing money? Oh, jeez, tha-tha-tha-that’s a tricky question, that one. Right?” burbled the startled deputy, with a nervous laugh. “Eh, I was actually pretty good at it until a banking crisis, eh, burst the living daylights out of me.”

Seán Ó Fearghaíl scrambled to explain himself. “I meant that about what Deputy O’Sullivan said.”

“Oh. Yeah,” murmured Wallace, perplexed. “Anyway, listen. I’m not going to be criticising aid and I’ve seen very good, genuine efforts being made to make things better on the ground,” he began, explaining he would be critical of the bigger picture.

Then he produced a book – Jason Hickel’s The Divide – and said he is currently rereading it. “It’s such an amazing read and everybody should read it if you want to know how this world is operating at the moment.”

He quoted a passage. “Yes, some aid goes a long way towards making people’s lives better, but it doesn’t come close to compensating for the damage that the givers of aid themselves inflict . . .”

Minister of State Ciarán Cannon decided he would seek out the book, and then gave his own recommendation: “Factfulness by a guy called Hans Roslin.” And while The Divide “seems to outline a particularly pessimistic view of the world”, Factfulness presents a far more optimist one.

“Perhaps the truth lies somewhere in between.”

Flanagan has his fill of filibustering

Is Charlie Flanagan ever going to be put out of his misery?

We think not. There are day and months of filibustering left in the Judicial Appointments Bill and Senator Michael McDowell, aided and abetted by the likes of Ivana Bacik, David Norris and Gerard Craughwell, shows no sign of letting up.

Twice this week, the Minister for Justice bemoaned his fate as he was incarcerated for yet more hours in the Upper House.

On Tuesday, he arrived for the second stage hearing on the Bill giving the go-ahead for a referendum to amend the divorce law. A mere two Senators were present: David Norris and Lynn Ruane. Norris called for a quorum “even if it is only a miserable six”.

Flanagan was not best pleased, bitterly complaining about having spent over 100 hours in the Seanad at this stage and lambasting Norris for being “at this game” again. The Minister has had to spend so long dealing with Shane Ross’s pet Judicial Appointments Bill he suspected Norris’s call for a quorum to discuss divorce was in some way related to the current bane of his life.

While the debate wasn’t very well attended, what stood out was the complete absence of any Fianna Fáil voice. Not one of the party’s Senators was seen in the the chamber. On the subject of the 38th amendment to the constitution, Fianna Fáil had nothing to say.

Two days later and the Bill was back for the Committee and final stages.

Charlie Flanagan’s humour had much improved in the interim. He recalled being a guest speaker at a meeting of the newly formed Laois-Offaly Divorce Action Group in 1986 at the time of the first divorce referendum.

His father, the late Oliver J Flanagan, “was a keynote speaker at a meeting organised by the Traditional Values anti-divorce group”.

“In the course of my address, on my feet to a room of about 15 people, I could clearly hear the booming, rather thunderous voice of my father addressing a meeting of approximately 550 at the same time in the same hotel.”

Father and son met on the stairs on the way out and when Oliver J asked young Charlie how his meeting went, his tone could could be best described as “tongue in cheek”.

However, it wasn’t long before Flanagan’s well-stretched patience was under pressure again. He had another four hours of the judicial Bill filibuster under his belt from the day before, and didn’t want to be unduly delayed by the final stages of the divorce Bill.

Senator Rónán Mullen put paid to that, launching into a number of speeches more suited to second stage contributions.

The steam was coming out of Chalie’s ears as Mullen talked on and on about marriage.

Why was Rónán being allowed to make a second-stage speech?

“I’ve done in excess of 100 hours here on a Bill,” cried the Minister. Again.

“I appreciate that” soothed Leas-Chathaoirleach Paul Coghlan. “I’ve been in the Chair for a lot of that as well.”

“Four hours of which we had yesterday . . .” sighed Flanagan.

“I’m not playing silly buggers here when I get up to make a few sincere points.”

Perhaps when he addresses the Seanad on Thursday morning, the Taoiseach might broach the topic of reintroducing the guillontine in some form in the near future.