Nurses’ strike: ‘I have to be Taoiseach for the whole country,’ Varadkar says

Leo Varadkar told the Dáil that if he concedes to nurses, and if a hard Brexit happens, he could end up having to announce job losses in the coming months. Video: Oireachtas TV 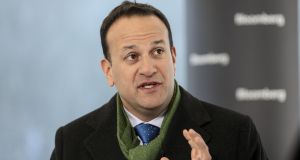 ‘We will have have to find a lot of money to save people’s jobs,’ Leo Varadkar said pointing to a chain reaction across the public service if the nurses’ claim is granted. Photographer: Simon Dawson/ Bloomberg

Taoiseach Leo Varadkar has said the Government will need funds to deal with jobs losses in the event of a hard Brexit as he faced calls to intervene in advance of a 24-hour strike on Wednesday by nurses.

Mr Varadkar said “I have to be a Taoiseach for the whole country” adding that in a few weeks or a few months’ time there could be job losses “and it would be irresponsible of me not to admit that to this House”.

“We will have have to find a lot of money to save people’s jobs,” he said pointing to a chain reaction across the public service if the nurses’ claim is granted.

People Before Profit TD Bríd Smith said the Taoiseach’s salary was six times greater than that of nurses.

“You’re worth six nurses , or are you?” she said accusing the Taoiseach of having a “hard neck” to use Brexit as a “stick to beat the nurses”.

But the Taoiseach said the risk to jobs had been highlighted by the Central Bank and Department of Finance. “This isn’t made up - and it’s not about blaming anyone,” he said.

He said the only one to blame for Brexit was Britain.

Sinn Féin leader Mary Lou McDonald hit out at the Taoiseach’s “very laissez faire approach” and detachment towards the imminent strike of the Irish Nurses’ and Midwives’ Organisation (INMO).

Ms McDonald called on the Taoiseach to intervene. “Stop sitting on the sidelines, get involved and sort this out.”

But he said that in the event of a hard Brexit the impact on the economy could include “needing money to assist” jobs in the agrifood and other sectors.

The Sinn Féin leader replied that “you’d never think you were the Taoiseach presiding over the most expensive hospital in the world”.

There was laughter and jeering when Mr Varadkar said that was factually incorrect and a hospital in Sweden was the most expensive at over €2 billion.

Mr Varadkar told Fianna Fáil leader Micheál Martin that the Government would consider any Labour Court recommendation if the nurses’ dispute and recruitment goes to a full hearing.

But he said “no Government could commit to a Labour Court recommendation it hasn’t yet seen”.

He said that it would be “rare” for a Government not to accept a Labour court recommendation but they would consider such recommendation if it got to that stage.

But he said “the solution to the nurses pay dispute has to be affordable to taxpayers, all public servants and to patients”.

Mr Martin had asked if the Government “will abide by that ruling” if the dispute went to a full hearing.

And he pointed out that it was costing the State €1.4 million a week to employ agency nurses. Graduates were leaving Ireland to go to the UK, Canada, Australia and elsewhere and was spending significant money attempting to recruit nurses from abroad.