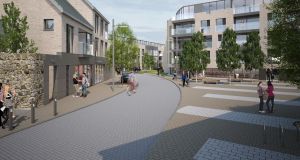 The development, located on Balscadden Road at the site of the former Baily Court hotel, was granted planning permission in September by An Bord Pleanála, under a fast-track route for large housing projects.

The development will comprise three apartment blocks, and is being built by Crekav Trading, part of the Marlet Group.

Mr Ó Ríordáin recently sent a leaflet to local residents to organise support for a judicial review to overturn the decision to approve planning permission.

The leaflet said it was “important to stress we are not against a housing development” on the site.

“What we are determined to fight is an over-development which poses a potential threat to adjoining houses, and will result in the peninsula being choked by thousands of trucks carrying thousands of tonnes of material,” it said.

The potential impact of the development could create a “substantial” risk of subsidence to neighbouring homes, the leaflet said.

The site is located in Mr Ó Ríordáin’s Dublin Bay North constituency, where he narrowly lost his Dáil seat in the 2016 general election.

Mr Ó Ríordáin and a local group of residents are looking to raise funds for the court challenge. The leaflet advertised a public meeting on the legal challenge for January 28th.

The development will consist of 40 one-bed apartments, 97 two-bed units, 27 three-beds and six duplexes, according to planning permission documents.

Mr Ó Ríordáin defended his decision to oppose the Howth housing development, stating he had “no problem” with the height or scale of the plans. “The problem is the impact of the development on nearby houses,” he said.

The judicial review challenge would seek to claim the developer’s environmental impact assessment of the housing project was inadequate, Mr Ó Ríordáin said.

“I don’t believe in handing the keys to the city to developers to do what they want on a given site,” he told The Irish Times.

The solution to the housing crisis needed to be “State-led”, he said.

A spokesman for Marlet said it was “disappointing to see Labour being one of the biggest opponents of housing in this city at a time when homes are so badly needed”.

The spokesman said the firm was “well used to Labour’s and Senator Ó Ríordáin’s objections to housing developments around north Dublin, giving different reasons each time”.

Previously Mr Ó Ríordáin and residents in Raheny were successful in blocking the development of 500 homes, planned to be built on playing pitches beside St Anne’s Park. Crekav Trading were also the developer on that site, and the decision to grant planning permission was successfully challenged by judicial review.