Brexiteers incorrect to claim no change will happen, according to Niall Cody 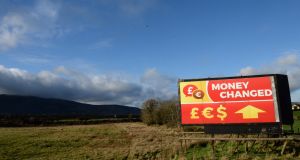 Brexiteers are “not right” when they claim there will be no dramatic change in Irish cross-Border trade if the UK crashes out of the EU, Revenue Commissioners chairman Niall Cody has said.

There will be “significant change” if there is a hard Brexit, Mr Cody told the Oireachtas finance committee. Revenue was focused on ensuring systems are in place to deal with legitimate trade in a no-deal scenario, he said.

He warned Brexit would bring “significant cost implications” for businesses engaged in trade with the UK as a result of leaving the EU single market and customs union and that the costs would deepen depending on the sector, notably for the agrifood sector.

Other significant challenges “will flow into the future to tackling illegitimate trade,” he said.

The State’s highest-ranking tax official, however, stood behind Government policy, confirming that the Revenue was not preparing to set up posts along the Border to check goods coming into the State after Brexit.

“Revenue is not planning for customs posts on the land border,” he told the committee.

Neither was Revenue looking at posts up to 15 kilometres away from the Border, he said.

“I don’t think that you would consider that as not being a Border post,” he said in response to questions from Fianna Fáil finance spokesman Michael McGrath.

Mr Cody refused to rule out a hard border emerging from “difficult conversations” that the Government faces with the Commission. Those conversations will work out north-south solutions to protect the EU single market if there is a no-deal Brexit.

“I couldn’t possibly speculate about what it is that will have to be done,” he told Sinn Féin TD Pearse Doherty.

Mr Doherty asked Mr Cody whether the Brexiteers were correct when they claimed that a no-deal crash-out Brexit would not result in Irish cross-Border checks and that this was fear-mongering by opponents of Brexit.

“The Brexiteers are not right; there will be significant change and what we have to do – and are trying to do – is managing the implications of legitimate trade,” the Revenue chairman replied.

Mr Doherty raised fears among constituents in Co Donegal that long-derelict facilities at some crossings at the Border with Northern Ireland were being cleaned up. He asked Mr Cody if this was just coincidental.

“There is a concern there is more or there is potentially more than what has been laid out in the public,” said Sinn Féin’s finance spokesman.

Mr Cody said Revenue were not involved in the cleaning up of any facilities for Border posts and denied that Revenue had access to private State funds that could be used to finance any secret plans.

“We don’t have facility to have secret funds and secret expenditure,” he said, joking that “your colleagues” - members on the Public Accounts Committee – would have “great fun with me” if he had access to “magic” funds.

“There is no work being done,” he said, seeking to assure Mr Doherty and his constituents.