Number of new Covid-19 cases lowest in over six weeks

Holohan: ‘Our behaviours are crucial in maintaining our progress’

Chief Medical Officer Dr Tony Holohan breaks down the numbers on healthcare workers affected by coronavirus, who make up 28.7 per cent of all Covid-19 cases in Ireland. Video: RTÉ 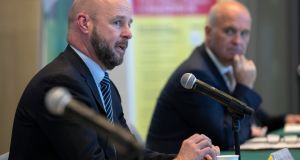 The number of new Covid-19 cases reported on Thursday is the lowest daily figure in over six weeks.

The deaths of another 29 patients were announced by the National Public Health Emergency Team (NPHET) at its briefing. There have now been 1,403 Covid-19 related deaths in the Republic.

Some 137 new cases of the disease were reported by NPHET, the lowest daily figures since March 22nd. The new cases bring the total number of cases to 22,385.

The reproduction number of the disease, a measure of how many other people an infected person goes on to infect, now stands at 0.5-0.6.

Chief medical officer Dr Tony Holohan said this showed the goal of suppressing the virus has been achieved and that collective effort by people had “saved lives”.

“Now we look to the pattern of Covid-19 going forward, as we attempt to ease restrictions. These weeks are just as important as the first weeks of our response. Our behaviours are crucial in maintaining our progress and keeping the reproduction number below 1.”

Asked about the Taoiseach’s remarks in the Dáil about the possibility of earlier cases of the virus before the first report case on February 29th, Dr Holohan said “I wouldn’t say it’s not possible”.

However, if there were cases before this date, they would have been sporadic and there was no reasons to believe Ireland had infection “at any significant level” then.

Almost 400 people had been tested before the first positive result came back, he pointed out. If an appreciable level of virus has been circulating, “it would have been picked up”.

Prof Philip Nolan, chair of the NPHET modelling advisory group, said; “The number of ICU admissions, new cases and deaths is now falling and has been for over a week. This is driven by a reduction of transmission of the virus in the community and reinforces the importance of our behaviours going forward.”

Prof Nolan said considerable progress was made in curbing the spread of the virus in the last week. All indicators pointed to the suppression measures taken from March 28th having been very effective.

However, if the reproduction number were to rise again to 1.6 the number of new cases would take off and “we’d be back to 1,000 cases a day in three weeks’ time”.

“Whatever happens over the coming week we need to find ways to keep the spread of the virus at very low levels for many weeks to come.”

Dr Holohan said that while a range of trends were giving reason for optimism and encouragement, “we’re not where we’d like to be” in terms of numbers of cases, deaths and ICU admissions.

An analysis of deaths shows 40 per cent of those who have died had been hospitalised while 4.9 per cent were admitted to ICU. A total of 86.5 per cent had underlying conditions. The median age of those who died was 84 years and the mean was 82.

Nearly as many women as men are now dying from the disease - 698 against 705.

There were 76 patients in intensive case on Thursday, less than half the peak reached last month. No new patients were admitted on Thursday.

Up to last Tuesday, 6,743 cases associated with healthcare workers were reported, accounting for 28.7 per cent of all cases.

There have been 880 deaths arising from cases associated with residential care facilities, or 62.7 per cent of all deaths. Deaths in nursing homes along amount to 761, or 54.2 per cent of the total.

There are also 176 cases among asylum-seekers in direct provision centres, it emerged at the briefing.