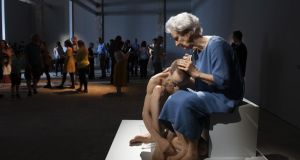 Cancelled: Sam Jinks’s In the Flesh sculpture exhibition, at Galway International Arts Festival in 2019; the festival was just one of this year’s scrapped events. Photograph: Andrew Downes/Xposure

The film-maker Lenny Abrahamson is to join a new advisory group to combat the severe fallout of the coronavirus crisis for the arts, the Arts Council announced today.

Its other members include the theatre and opera producer Anne Clarke; the chairwoman of the National Campaign for the Arts, Angela Dorgan; the director of the National College for Art and Design, Prof Sarah Glennie; the musician Martin Hayes; the director of the Arts Council, Maureen Kennelly; the Irish Times journalist Fintan O’Toole; and the public-health specialist Dr Gabriel Scally. The economist Alan Gray will provide independent advice to the group, which meets for the first time tomorrow.

The Arts Council says the pandemic’s effects on the arts sector include 19,000 days of paid work lost by the end of April, 2.4 million members of the public missing artistic experiences, and income of €6.4 million lost from cancelled activities by the end of May. The Department of Public Expenditure and Reform has identified arts and entertainment as one of the sectors most affected by the shutdown.

The advisory group, which will meet several times over the next few weeks, has been asked to identify ways to deal with the crisis and to work out the scale of the emergency financial package the sector will need from the Government. It will also look at how arts organisations can emerge from lockdown and implement social distancing, how the Arts Council can help the sector adapt to constantly shifting ways of working and engaging with the public, and how the public can be reassured when cultural venues and events are safe to return to.

Maureen Kennelly, who has just taken over at the Arts Council, says its recent surveys of cancelled events “show a colossal level of disruption to activity. Enormous emotional and financial investment has gone into planning those events, and the sense of shock and worry is palpable. For a profession that is already characterised by a high degree of insecurity, this added layer of uncertainty is deeply unsettling.”

The council’s chairman, Prof Kevin Rafter, who will also chair the advisory group, says the organisation recognises the scale of the crisis. “ We know additional funding will be needed, but we also want to consider what other steps are required to ensure the sector survives.”