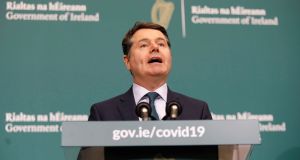 Minister for Finance Paschal Donohoe has said the Covid-19 wage payments are set to be reduced in the weeks ahead. Photograph: Photocall Ireland/PA Wire

Opposition parties say they will fight any attempts by the Government to reduce or change special Covid-19 welfare payments, following repeated suggestions by Minister for Finance Paschal Donohoe that the payments cannot continue indefinitely.

Government income and wage supports introduced in response to the Covid-19 crisis are set to be reduced in the weeks ahead, Mr Donohoe indicated again yesterday, though he said they will continue in a modified way beyond their current expiry date of the end of June.

But a Dáil battle over changing the pandemic payments is certain, with People Before Profit TDs warning that they will fight such a move, while in the Dáil, Mary Lou McDonald warned the Government not to cut the payments.

He said the party “will use all and any procedures in the Dáil” to oppose any move to reduce the subsidy. The special Covid-19 unemployment rate is paid at €350 a week, where regular unemployment benefit is just over €200 a week.

Almost 600,000 people are being paid the special Covid payment, while a further 400,000 are seeing some of their wages paid by the State.

Senior Fine Gael and Fianna Fáil sources agree that the special Covid payments are likely to be reduced, but senior Green sources were silent on the question last night.

Negotiations on a programme for government between Fine Gael, Fianna Fáil and the Green Party finally get under way on Thursday where measures to reach the 7 per cent annual target of greenhouse gas emissions, insisted on by the Greens, are likely to be discussed.

But Government sources say that the rapidly deteriorating economic and fiscal situation will also be on the agenda, with a “stark” briefing on the state of public finances likely to be given to the talks in the coming days. EU forecasts yesterday said the State’s economy would shrink by 8 per cent, before rounding next year and growing by 6 per cent.

The Government will have to seek Dáil approval within the next month or so for continued spending on the Covid-19 unemployment and other social welfare benefits.

The Department of Social Protection’s legal authority to spend money will expire in early to mid-June, sources say. Because of the general election the spending estimates for the year have not yet been approved by the Dáil.

At the moment the Government is spending money under a rule which allows it to spend four-fifths of the previous year’s budget while it waits for Dáil approval.

However, due to the €4 billion cost of the emergency welfare measures, the Department of Social Protection will hit that ceiling within four to five weeks.

Elsewhere, chief medical officer Dr Tony Holohan said he remains “hopeful” that measures will relax in line with the Government’s plans on May 18th. However, he said while most indicators are performing well, there is a “persistent level of infections coming from the community, if I’m honest about it, particularly from younger people in the community”.