Ex-TD yet to comment on reports he received €10,000 a month from EPP, plus Dáil salary and expenses 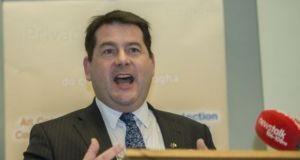 The Dáil Members’ Interests committee can conduct an investigation into the former Fine Gael TD Dara Murphy’s attendance, but only if the former Cork North-Central deputy requests an inquiry be carried out himself.

While the Standards in Public Office Commission cannot pursue an investigation because Mr Murphy has resigned ahead of taking up a job in the European Commission, the committee can do so under the provisions of the 1995 Ethics Act if Mr Murphy asks it to do so.

A spokesman for the Taoiseach could not say if Leo Varadkar would ask Mr Murphy to request an inquiry. The Fine Gael leader yesterday said there should be an investigation into the affair.

Mr Murphy has been at the centre of a controversy about his non-attendance at Leinster House while claiming a Dáil salary and expenses. He has spent much of the last two years working with the European Peoples Party (EPP), to which Fine Gael is affiliated.

He had the lowest attendance record of all 158 TDs before his resignation and had not spoken in the Dáil for almost two years. He has previously said he will co-operate with any investigation.

Mr Varadkar said that if Mr Murphy is found to have claimed expenses incorrectly, he should pay the money back.

Fianna Fáil on Thursday pressed for an inquiry with frontbench TD Darragh O’Brien saying that the Ethics Act allowed a TD to request an investigation and for the committee to undertake it.

“In the interests of transparency and completeness the Taoiseach should request Dara Murphy to do this, or at least Dara Murphy should clarify whether he intends to do so,” he said in a statement.

The committee is expected to meet next week to discuss the case, but the legislation makes clear that an investigation is only possible if it is requested in writing by the former member. Mr Murphy did not respond to queries yesterday.

Nor did he comment on reports that he had been paid €10,000 a month by the EPP in addition to his Dáil salary and expenses when he was employed as campaign director for the pan-European group. The EPP did not respond to questions on the matter from The Irish Times.

Mr Murphy was paid by the EPP through a company called Epecon, of which he was a director and which is listed on the Dáil register of interests. The latest accounts filed in the Companies Registration Office by Epecon Ltd list accumulated profits of more than €26,000. The accounts list €22,000 in the “director’s current account”. It had total cash of €60,000 and debts of €34,000.