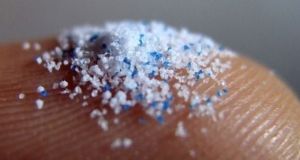 There are about 100,000 microbeads in a facewash product.

Ireland will be the first EU country to ban plastic microbeads in household and industrial cleaners under new legislation introduced in the Dáil.

Minister for Housing, Planning and Local Government Eoghan Murphy said some EU members have already introduced restrictions on the sale of “rinse down the drain” cosmetic products containing plastic microbeads.

But the scope of his Microbeads Prohibition Bill “extends to cover household and industrial cleaning products containing plastic microbeads, which no other EU member state has done to date” and he hopes to implement it by year end.

The Bill makes it an offence to manufacture, supply or sell products containing plastic microbeads which are mostly used in soaps, shower gels and facial scrubs as well as some toothpaste and abrasive cleaners.

“This is due to their potential for environmental harm as microplastic litter in marine and freshwater environments,” Mr Murphy said.

Microplastics are tiny non-biodegradable solid plastic particles. These particles enter the marine environment in a variety of forms including fibres shed from clothes, lost raw material pellets or microbeads used in cosmetics, cleansing products and detergents.

Mr Murphy said the Bill covers products designed to be rinsed or washed off down the drain.

But he will exclude “leave-on” or “wear-off” products not designed to be washed off with water.

“While many people wipe off such products and then discard the wipes down the drain, they are not supposed to do this,” he said.

Mr Murphy pointed out that manufacturers could not re-formulate such products as easily as “rinse-off” versions and “the impact to the cosmetics industry and to consumers would be enormous if such a blanket ban was introduced at this time”.

But Sinn Féin spokesman Eoin Ó Broin said these products “end up in our sewerage system and ultimately our water system because of people’s misuse of wipes”and shows there is a problem.

He said the plastics industry spends €2 billion a year lobbying on the broader issue of banning single-use plastics.

Fianna Fáil’s James Lawless said his party also supported the Bill but was disappointed it had taken so long. There had been repeated attempts to introduce such legislation including a Bill from Green Party Senator Grace O’Sullivan in 2016 and legislation from the Labour Party and Fianna Fail, all of which had been blocked by the Government. The US banned the use of microbeads in 2015.

Labour TD Sean Sherlock, who introduced a Bill last year, said he was worried they were not “going the whole hog” on banning microbeads by introducing an exception with wear-off product.

“ If we have to wait for a six-year lead-in time for restricting leave-on cosmetic products” to allow for product reformulation then he feared “we have not fully tackled the problem”.

The Minister said there was a complication in the composition of leave-on products which in some instances was “liquid polymer” and was not as easily addressed as other microbeads.

The legislation now goes to committee stage for debate on amendments.