Speaking in the Dáil, Minister for Health Simon Harris has said that if the government were to accept the current demands from the INMO that it would send public finances "into an unsustainable spiral." 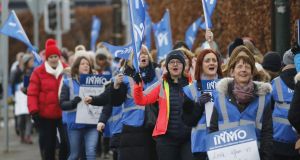 The stability of a collective wage agreement cannot be put on the table for talks to resolve the nurses’ dispute, Minister for Finance Paschal Donohoe said.

He said changes to allowances that were “unlikely to trigger any competing claims” from other public service sectors could be made.

The third 24-hour strike by aound 40,000 members of the Irish Nurses and Midwives Organisation (INMO) and the Psychiatric Nurses Association (PNA) as part of a dispute over pay is taking place on Thursday.

Mr Harris said by the end of the day a total of 37,000 outpatient appointments will have been cancelled along with 6,000 in-patient procedures.

The dispute would escalate next week when three 24-hour strikes are planned and this was putting patients at risk, the Minister said.

During a two-hour Dáil debate on the dispute Ministers were repeatedly challenged to enter talks without pre-conditions and to discuss pay.

Signalling that pay could not be part of discussions, Mr Donohoe said if changes were made to the public sector pay agreement there would be “be immediate consequences for every other public servant in the State”.

Responding to a question from People Before Profit TD Gino Kenny, the Minister said he stood by the public service pay commission’s recommendations that “there could be targeted changes made in particular in relation to allowances which at that point were unlikely to trigger any competing claims”.

Mr Donohoe said there were now 3,876 more nurses and midwives in the health system and the “turnover rates are 5 per cent and 6.8 per cent including retiring staff”.

He said any nurse on wages below €35,000 would see increases and those on less than €50,000 would have their wages fully restored this year.

He added that under the wage agreement anyone who had been on €70,000, who had their wage cut, would have it fully restored by the end of 2020.

Agreeing to the pay demands of the nursing unions in the industrial dispute would “tilt the prudent handling of the public finances into an unsustainable spiral”, Minister for Health Simon Harris said. .

Their demand would “damage our economy, our health service and ultimately the nurses that we support”.

He said “the stakes are high” and the situation “is like walking a tightrope”.

The dispute would not be solved on the picket line or in the Dáil, the Minister for Health said but through the State’s industrial relations machinery.

The Minister said the debate was not about “who cares more for nurses” but about how to resolve the dispute.

But he pointed out that the Government, and the INMO and the PNA had signed up to a three-year Public Service Pay Agreement.

He said this agreement prohibits cost claim pay increases during its lifetime. “On this basis the industrial action we are now seeing by these two unions should not be happening.”

“That agreement commits to seeing significant increases in pay by 2020, and nurses and midwives can expect to see their deserved share of these increases beginning this year.”

He said he and the Minister for Public Expenditure and Reform issued a statement calling for immediate engagement in the context of the current dispute with relevant unions. “Unfortunately, I regret the unions did not agree to this engagement.”

Fianna Fail health spokesman Stephen Donnelly said that patients in Ireland now wait longer than patients in any other EU country to see doctors and get treatment.

He said the nurses were not looking for a blank cheque but for “real, honest engagement”.

Fianna Fail TD Barry Cowen said the Government was quick to say the pay commission’s recommendations were implemented in full but “you were very slow to admit that the chair of that commission in its foreword did allude to the fact that they did not have the correct analytics and statistics available to them to make a recommendation that they could stand over” and that was most important.

Sinn Féin Louise O’Reilly called on the HSE to “stop spending a fortune to supplement the understaffing by paying for agency every day of the week,” because “it is a waste of money”.

She said it was an “absolute insult” to the Government to offer to talk to the nursing unions about everything but pay.

Labour health spokesman Alan Kelly said the public support for the nurses will stay with them because of the manner in which they conducted themselves, the way in which they act in their profession and the exemplary work they do.

People Before profit TD Bríd Smith said the nurses were taking industrial action because of the lack of “safe ratio” of nurses to patients. She said it should be one nurse to four patients but it is in reality one to eight or even one to 11.