Irish woman explains why she wanted to kiss Jean-Claude Juncker 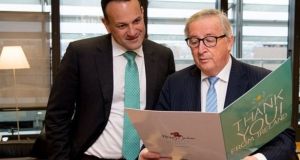 Many observers had assumed that it had come from the Taoiseach, but Jean-Claude Juncker said it was sent by an Irish citizen

The woman who sent a card to European Commission president Jean-Claude Juncker thanking him for his support for Ireland in the Brexit negotiations said she did so because he made her feel proud to be Irish.

Mr Juncker produced the green-coloured ‘Thank You from Ireland’ card at a press briefing on Wednesday with Taoiseach Leo Varadkar. Many observers had assumed that it had come from the Taoiseach, but Mr Juncker said it was sent by an Irish citizen.

Hailey Kierse (38), originally from Clare but now living in Killiney, south Co Dublin, said she had “absolutely no agenda” in sending the card and and had not even heard of Mr Juncker when she posted her letter care of the European Commission in Brussels.

She sent it from herself, her husband Dave and their two dogs Scooby, a miniature Jack Russell, and Little Boo, a Chihuahua-Jack Russell cross. Both were rescue dogs.

“I never in a zillion years thought that he [Juncker] would see it let alone read it or mention it,” she said.

“I was afraid the Good Friday Agreement would be shelved. Then Mr Juncker came out by saying that Europe’s border is Ireland’s border.

“I was happy for once we were on a world stage and doing well. I’m not political. I don’t talk to politicians. I don’t even watch Oireachtas Report, but what he said resonated with my heart. We may be a small country, but right now we feel mighty.

“I’m literally just one person in Ireland. It is literally me, my husband and my two dogs. I never even told anyone in my family.”

Inside the card, Ms Kierse wrote: “Dear Mr Juncker, I will be honest. I never really understood the importance of the EU.”

She continued, saying the EU “was something we learned about in school, a part of history, more than a part of today”.

Ms Kierse went on to praise Mr Juncker. “Your five words, ‘Ireland’s borders are Europe’s borders’ made me want to jump for joy, punch my hands into the air, and kiss you. For the first time ever Ireland is stronger than Britain. That strength comes not from guns or bombs, it comes from your words and that of your colleagues.”

She then went on – semi-seriously, she says – to state: “Britain does not care about peace in Northern Ireland. Ireland to them is a nuisance. The UK do [sic] have an alternative. They can keep Northern Ireland in the customs union by handing it back, that which they stole by brute force, to the Republic of Ireland (kind of).

Somewhat ironically, Ms Kierse sourced the card from a British company, Moonpig. com, and it was sent from Britain with a British postmark.

Ms Kierse said it was a “proud of Ireland card not an anti-British card. We don’t have to apologise to the UK for being proud of ourselves.”

She decided to go public on RTÉ Radio 1’s Liveline programme about being the person who sent the card when she saw the reaction that it had received.

She also detailed some of the responses to her card online which were posted on the Daily Mail website. One read: “Whingery is part of the Catholic mindset. Poland, Hungary, Ireland, Italy, Spain, Portugal – all priest-ridden, all sad nations of sadder underachievers. Protestants, step up, take responsibility, get on with the job and prosper”.

Another stated: “I loved the Irish, but sometimes they come across as toddlers. It is not England’s fault that you have never organised yourselves to take your country back and turn it into a powerful place. It is no point claiming the 800 years of hurt and then sticking out your bottom lip like toddlers.”

When a spokesman for Mr Juncker was asked if the European Commission president had received any cards from British people wishing him well, he said: “I have no idea, unfortunately.”