Government ‘will not accept’ reopening of Brexit withdrawal agreement 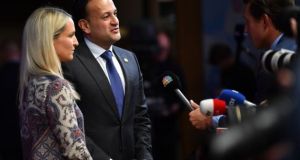 The Irish Government would “absolutely not” accept the reopening of the Brexit withdrawal agreement with the UK, Minister of State for European Affairs Helen McEntee has said

Despite the House of Commons voting for an “alternative arrangement” to replace the backstop, Ms McEntee on Friday said: “We are 72 hours on and not only do we not have any proposals, but your own secretaries have admitted that they don’t have any and that there is no solution here.”

British politicians on Tuesday instructed prime minister Theresa May to reopen the agreement with the EU to replace the backstop – an insurance policy to prevent the return of a hard Border in in Ireland.

Ms McEntee said proposed technological methods for keeping the Border between the Republic of Ireland and Northern Ireland open were “not the answer”, telling BBC Radio 4’s Today programme: “This is about protecting a peace process . . . No amount of technology can address that.”

Ms McEntee said: “This was a deal that was negotiated with the UK, by the UK. They weren’t bystanders in a separate room, there were discussions, negotiations, there were compromises on both sides.

“The fact that we now have a deal that took that long to be negotiated and that deal has now been voted against by the very prime minister that negotiated it is extremely difficult.”

She said a UK request to extend the two-year Article 50 negotiation process would “most likely” be approved by the EU27.

But, she added: “At the same time, I think there would be a very clear ask from the other member states as to what exactly it is we are trying to achieve.

“There is no point in looking for an extension if we end up back to the same place in three months’ time. We need to have a clear direction from the UK Government as to what it is we want to achieve.”

Ms McEntee said Tánaiste Simon Coveney is expected to discuss Brexit’s impact on the Belfast Agreement with the US government during a visit to Washington next week.

On Friday, German justice minister Katarina Barley said the EU does not see any solution to resolving the issue of Irish Border arrangements after Brexit other than having a backstop.

“We definitely will not accept a Border in the normal sense between Ireland and Northern Ireland, that is something that we’ve been very clear about from the very beginning,” Ms Barley told RTÉ.

“Britain has not offered any proposition whatsoever and I think that we (the EU 27) have to stay really, really strong on the backstop,” she said.

British foreign minister Jeremy Hunt said on Thursday the UK government would take a few days to formulate new proposals for the Irish Border. He also hinted an extension to the Brexit process, beyond exit day on March 29th, might be required.

“I think that is important that we (the EU 27) all stay together and don’t let time pressure divide us,” added Ms Barley.–PA/Reuters