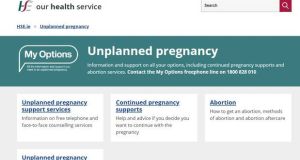 The Health Service Executive has complained to Google after it was forced to increase its advertising spend on its MyOptions.ie website for unplanned pregnancy services to stop a fake website getting the top hits on the search engine.

Yesterday the top return on a Google search for “My Options” was for a site called myoptions.website, not operated by the HSE, but run by an anti-abortion group.

The site contains a mobile number and an email address, promises a free ultrasound and has a video claiming links between abortion and cancer.

The HSE’s MyOptions.ie site came on stream in early January after abortion up to 12 weeks became legal in Ireland. The site contains information on the different options available and how to access the services.

The Irish Times understands that the HSE had to increase its advertising spend on the MyOptions site with Google in order to return the website to the top of the Google search list.

As of last night, the bogus site had fallen in rank to fifth.

It is also understood the HSE has complained to Google about the matter but is still awaiting a response.

The HSE was contacted but was not in a position to comment on the matter last night.