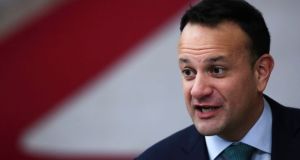 A teenage boy whose operation for spinal surgery was cancelled at short notice will have his surgery later this week, Taoiseach Leo Varadkar has told the Dáil.

Mr Varadkar said he only became aware on Wednesday morning about the case of Eoin Ward, who has been waiting for scoliosis surgery for four years.

Mr Varadkar was responding during leaders’ questions to Fianna Fáil leader Micheál Martin who said the 16-year-old had 94 per cent curvature and was in great pain. He said Eoin’s mother had said the pressure on nurses in the wards of Temple Street was ridiculous. The teenager has cerebral palsy and holoprosencephaly and developed scoliosis six years ago.

Mr Martin said the waiting times for children across the board for a whole range of specialities are “quite shocking and they do represent a damning indictment of Government policy”.

This he said was why the HSE service plan was very worrying and that particularly in terms of children’s services it would be “an extremely difficult year in 2020”.

The Taoiseach said it was his understanding that the operation was being rescheduled for later this week.

“I’ve had the distinct displeasure as a junior doctor of having to ring people to say their appointment has been cancelled. I know the stress and worry that causes people,” he said.

But he stressed that “our total cancellation rate in Ireland in is around 2 per cent or 3 per cent. I know if you’re one of that 2 or 3 per cent that doesn’t matter,” but sometimes key staff were not available or a piece of equipment was not working.

Mr Varadkar also praised the new HSE chief executive Paul Reid and the board and said there had been a “dramatic improvement in financial planning and management”.

He rejected a claim by Independent Donegal TD Thomas Pringle that the service plan would do “nothing to end the current HSE embargo” on recruitment and would not specifically address bed capacity or staffing at Letterkenny hospital in Co Donegal.

Mr Pringle said the Government did not recognise that governance of the health service was about more than just money.

But, the Taoiseach said: “Increasing staff numbers by 3,000 does not constitute an embargo. This time next year 3,000 more staff will work in our health service than today.”

He said there would be additional funding for community services and extra home care hours and the disability budget would exceed €2 billion for the first time.

Mr Varadkar acknowledged there would be challenges and problems in the health service next year but he said there were improvements too, as he listed a number including the National Rehabilitation Hospital in Dun Laoghaire, Co Dublin and the new National Forensic Mental Health campus in Portrane, Dublin, the successor to the Central Mental Hospital in Dundrum.

Three major extensions would open - at Dunmore in Waterford, Limerick and Clonmel hospitals. He said seven- and eight-year-olds would get free GP care and more people over 70 would get a medical card and prescription charges would be reduced for everyone.

He said patient outcomes would continue to improve including survival rates for stroke, heart attacks and cancer which he believed would exceed the European average in the next couple of years.

Mr Varadkar said that the waiting lists for outpatients had fallen for four months in a row after years of investment and the number of people waiting more than 12 weeks for hip and knee replacements, cataract operations, angiograms, veins, tonsils “is about half what it was when I became Taoiseach”.

He said improvements should be acknowledged and “at the very least we should be very respectful of staff in our health service who work so hard”.

Daughter insisted she did not ‘harm a hair’ on Patricia O’Connor’s head 19:11
Mitchell O’Connor does not want drugs decriminalised ‘in our country ever’ 19:09
Motorists urged to take care after snowfalls in west of Ireland 18:54
Man jailed for sexually assaulting woman with special needs 18:12
Doctor struck off register for failing to keep up with professional competency 17:43
SUBSCRIBER ONLY