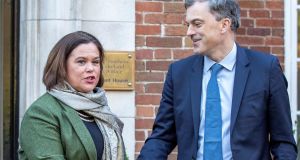 The British and Irish governments have been urged to publish a document outlining their best read of what would constitute a reasonable agreement to restore the Northern Executive and Assembly – if it is clear that the parties remain deadlocked in the current Stormont negotiations.

As talks resumed at Stormont on Monday involving the five main parties and the two governments, the SDLP and Alliance leaders Colum Eastwood and Naomi Long said that the governments should disclose a document they are preparing on how best to break the logjam.

Ms Long after meeting the Northern Secretary Julian Smith on Monday morning said Dublin and London had prepared a draft document on what they believed was the best way forward.

Ms Long said it was not a “finished article” but was in draft form. “My advice to the governments is if they can’t get agreement around the table that they publish their draft and ask parties either to accept or reject it,” she urged.

“Let’s decide once and for all, and let the public know. No more of this ‘there was a deal, there wasn’t a deal’ nonsense that we had before when things were falling apart. Let people know what was on offer, and let people know whether their elected representatives are representing them or not,” added Ms Long.

The Northern Secretary Julian Smith was meeting delegations from the DUP, Sinn Féin, the SDLP, the Ulster Unionist Party and Alliance at Stormont House on Monday morning into early afternoon while the Minister for Foreign Affairs Simon Coveney was due to hold bilateral meetings with the parties in the evening.

A programme of work involving the parties and the two governments – when Mr Smith and Mr Coveney are available to be in Belfast- was being prepared for the rest of the week as efforts were made to strike a deal before the January 13th deadline.

Legislation that allows civil servants effectively run Northern Ireland in the absence of an Executive ends on January 13th and Mr Smith has stated that thereafter he is obliged to call new Assembly elections.

And while Alliance won a seat in North Down and saw its vote increase by nine per cent in the Westminster election Ms Long said she did not want an election – while adding she believed Alliance would do well if such a poll were called. “We want to see the Assembly up and running again, not an election; I can’t be more clear than that.”

SDLP leader Mr Eastwood also said the governments should publish what they believed was a good deal to reinstate the Executive and Assembly.”I’ve been calling on the two governments for years now to produce a document because I think that leaving this to the DUP and Sinn Féin can no longer be acceptable,” he said.

“If the parties can’t come to an agreement in a couple of days I think the two governments should put a document in place and force us to either say ‘yes’ or ‘no’,” he added.

“Let’s get on with it. Let’s get back into the room and solve the problems,” said Mr Eastwood.

Mr Eastwood said the problems to be resolved were not “big difficult issues”. “But what has been missing has been political will. I think it is now in the interests of the DUP and Sinn Féin. The electorate has spoken to them very, very loudly...the people have made it very clear, they are sick of this standoff.”

And while the SDLP won two seats in the election and increased its vote by three per cent Mr Eastwood said he too did not favour fresh Assembly elections. “I think people are sick of elections. If we have an election, well we welcome it because politically in a selfish way we would welcome it. but I don’t think that is necessary. I think what we need to do is get a deal done, get back in and get on with the business of governing this place.”

Around 50 healthcare workers took part in a protest outside Parliament Buildings on Monday morning, as the talks were taking place. They were accompanied by a Santa, who delivered two sacks full of petitions calling for “a safe, well staffed health service, an end to crisis waiting lists and pay parity for all workers”.

Healthcare workers in Northern Ireland have been taking part in industrial action over pay and staffing levels. Nurses are due to go on strike on Wednesday for the first time in the North’s history.

Among those taking part in the protest was Conor McCarthy, the chair of Unison’s health committee and the union’s representative in the Royal Victoria Hospital in Belfast.

“It is breaking our hearts seeing the suffering of patients, seeing people on waiting lists, seeing procedures being cancelled,” he said. “It is horrendous.

“We want devolution restored and for the Assembly to help address long-standing injustices and the pay gap here,” he said.

Around 100 schoolchildren from Irish-medium schools also took part in a protest calling for the introduction of an Irish Language Act.

Following Sinn Féin’s meeting with Mr Smith, party leader Mary Lou McDonald, said she had outlined to him three “ingredients for success” which she said were all “achievable”.

These were the “resolution of the outstanding issues” - the “old staples” of Irish language rights, legacy issues and the reform of the petition of concern - as well as “the formation of an inclusive Executive” and “a big cash injection” which would be used to meet the demands of striking healthcare workers for pay parity with NHS staff elsewhere, though she said the party had no specific figure for the amount needed.

The “big test”, Ms McDonald said, would be “political will - and that’s not new either”. Flanked by the party’s Northern leader Michelle O’Neill and chief negotiator Conor Murphy, Ms McDonald told reporters outside Stormont House there was some “heavy political lifting to be done”, but declined to identify any “red lines” for the party.

“It’s not helpful...for people to be setting out red lines or talking about red lines. That’s not how we understand this matter or how we articulate it,” she said, adding that she would not “go down the rabbit hole of using language that ultimately sets the process up for confrontation”.

On the Irish language and on the issue of public services, she said, she believed agreement could be reached. “Everybody knows that language rights have to be met, I hope at least everybody has arrived at that conclusion,” she said.

But she implied that agreement would not be reached at any cost. “People don’t need a lame duck Assembly or Executive, they need institutions of government that can deliver,” she said.

“Clearly there are there are issues to be resolved and clearly we have strong positions on many issues.

“What’s important is that we get an accommodation that can endure, and to endure rights have to be acknowledged and vindicated, public services have to be invested in, and every political party has to show up around the Executive table and ensure that they’re part of the solution and making the institutions of government work for everyone.”

Meanwhile, the DUP leader Arlene Foster said that she and senior colleagues, MPs Sir Jeffrey Donaldson and Gavin Robinson, had a “very good engagement” with Mr Smith. The party’s former leader at Westminster Nigel Dodds, who lost his North Belfast seat in the election, did not join the delegation.

Ms Foster said Mr Dodds had a number of organisational matters to sort out in relation to North Belfast.

Similar to the Sinn Féin delegation, Ms Foster said there was a requirement for a “cash injection” from the British government to address a range of issues including the current health crisis, education and the economy.

The DUP reluctance to concede the Sinn Féin demand for an Irish language act has been one of the key issues blocking a deal. Asked about this, Ms Foster said: “What we need to see is a new cultural and linguistic deal, one that recognises the rights, the security and confidence of everybody in Northern Ireland. We’re certainly up for that sort of a deal and I hope that the other parties will be up for that sort of a deal as well.”

In relation to a possible Assembly election in January, Ms Foster said the next election was scheduled for 2022. “What we need to do is to get the Assembly up and running. That’s what people want us to do,” she said.

Mr Smith said the message from the election was the public saying “loud and clear” that they wanted Stormont back. Referring to the absence of a functioning Assembly at Parliament Buildings, he said: “This empty symbol at the top of this hill cannot go on any longer. We have to govern. We have to get Northern Ireland parties governing in the best interests of the Northern Ireland citizens.”

In relation to the health crisis and the demand for a pay increase for nurses and other health service staff, Mr Smith indicated that in the continuing absence of Stormont he would not be seeking special funding from the British government to deal with the matter now. He said it was primarily a devolved matter. “This can be solved by the parties coming together and moving things forward.”

Mr Smith expressed reluctance to see an Executive restored without all outstanding divisive issues dealt with. “I think the biggest tragedy of the talks process would be for the Executive to get up and running, and then fail. You have to address head on the major issues that need resolving. Let’s deal with them,” he said.

“Let’s get the parties talking to each other and resolving them, and then let’s move forward but I think the idea that we just paint over the cracks, get it up and running and then it fails in a few weeks or a few months is not a good one.”