Taoiseach suggests Labour party abstain in votes of no confidence 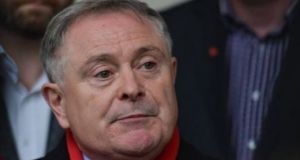 Labour leader Brendan Howlin asked the Taoiseach if he would consult parties other than Fianna Fáil about a date for the general election.

Taoiseach Leo Varadkar has said the Labour leader Brendan Howlin should consider abstaining in any future motion of no confidence in the Government.

Mr Varadkar asked him to look at abstaining or supporting the Government after Mr Howlin asked if he would consult parties other than Fianna Fáil about a date for the general election.

Speculation has intensified about how early in the new year an election might take place.

Mr Howlin referred to the proposal that the Taoiseach would meet Fianna Fáil leader Micheál Martin in the next couple of weeks to fix such a date.

The Wexford TD asked if that meeting would go ahead and “will you involve other party leader in that or have you determined yourself when this Dáil should end”.

The Taoiseach said he would have the opportunity to speak to all party leaders in the next couple of weeks, “as I do regularly”.

He added: “I’m conscious this isn’t necessarily a matter for just me and the leader of the Opposition”.

He said the other parties “make up an increasing number of people in the Dáil”.