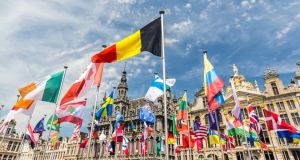 Declan Kelleher has been a pivotal figure in Irish backroom Brexit dealings in Brussels. Photograph: iStock

The Government has approved the appointment of a slate of Irish ambassadors, including the high profile post of ambassador to the EU.

Declan Kelleher, a long-serving diplomat who postponed his retirement to remain in Brussels during the Brexit negotiations, is now expected to retire and to be replaced by Tom Hanney, currently ambassador to Austria.

Mr Kelleher is a vastly experienced diplomat who has been Ireland’s “permanent representative” in Brussels since 2013. He previously served for almost a decade as ambassador to China.

He has been a pivotal figure in Irish backroom Brexit dealings in Brussels, and is regarded as wily at reading the politics of technical negotiations.

Mr Hanney joined the Department of Foreign Affairs in 1978 and has served in a number of posts, including in Northern Ireland and as deputy in the Brussels job until his appointment to Vienna in 2016. He was also one of the first joint secretaries to the North South Ministerial Council in Armagh.

While the Government has approved the appointment to replace Mr Kelleher it is not expected to take place until some time next year.

The Government also approved appointment to the new missions to be established in Manila (Philippines), Rabat (Morocco), and Kiev (Ukraine).

James Kingston will be the new ambassador to the Netherlands at the Hague. He has worked as legal advistor in the Department of Foreign Affairs since 2009.