Idea London can get better to deal misunderstands how EU works, says Varadkar 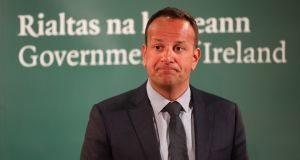 Taoiseach Leo Varadkar has warned it would be a “terrible political miscalculation” for anyone in London to think they will automatically get a better Brexit deal after Westminster’s failure to ratify the Withdrawal Agreement.

“That is really to misunderstand how the European Union works,” he said.

As the contest intensified in Britain for a new Conservative party leader, Mr Varadkar told the Dáil he was “a little concerned at political developments in London at the moment”.

He said outgoing British prime minister Theresa May “wasn’t a bad negotiator. She had a good team. I believe they got the best deal they could have got, given the limited leverage that a country leaving the EU has.”

Mr Varadkar said the deal took two years to negotiate and while not perfect “it is a finely balanced compromise. Everyone had to give and take.”

He said that “sadly the House of Commons failed to ratify that agreement”.

Mr Varadkar was responding during Taoiseach’s questions to opposition leaders about developments in Brexit with the Conservative party leadership contest to replace Mrs May as prime minister.

Labour leader Brendan Howlin said a new prime minister “will potentially and most likely be a harder Brexiteer than the current one”. As a result a hard Brexit is more likely and businesses in particularly had to up their preparations, he said.

The Taoiseach told him he was a “little concerned that some people in London seem to think the failure of the House of Commons to ratify the agreement automatically means they will get a better agreement.

“That is a terrible political miscalculation. I hope it is not the one that is being made across the water.”

To think like this “is to really misunderstand how the European Union works”, he stressed.

In the UK, the British Labour Party will launch a bid to block a new prime minister from forcing through a no-deal Brexit, according to the Guardian.

Jeremy Corbyn has tabled a cross-party motion that, if passed, would give MPs control of the parliamentary agenda on 25 June. That motion could then be used to begin legislation to prevent the UK from leaving the EU without a deal.

Meanwhile, Fianna Fáil spokesman on European affairs Sean Haughey asked about how the four major appointments would be decided and the gender balance, in the wake of the European elections.

Mr Varadkar said French president Emmanuel Macron and he “are very keen to see at least one of the major top jobs going to a woman” and he would like to see poll topping MEP Mairéad McGuinness as president of the Parliament.

He said no group has “anything remotely approaching” a majority in the new parliament.