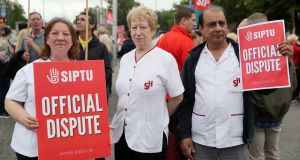 Taoiseach Leo Varadkar has rejected as “bogus and misleading” comparisons between pay restoration to judges and the HSE support workers’ strike.

Following reports that the Taoiseach Leo Varadkar had signed off on pay restoration for members of the judiciary, Sinn Féin deputy leader Mary Lou McDonald and Solidarity TD Paul Murphy contrasted that with the situation of 10,000 HSE workers on a one day strike on Wednesday over delays in payment following a job evaluation process.

Ms McDonald said she had visited the striking catering workers, nurses’ aides and porters at a number of hospitals. The workers felt “betrayed” because the Government had broken its word to them about restoring recession pay cuts.

“They contrast with all due respect to members of the judiciary and the regard in which they are held and a caterer or a porter, and they are wounded by this and they believe you have let them down.”

“Somehow your Government regards them as ‘menials,’ as menial staff carrying out some menial role,” Ms McDonald said to Mr Varadkar.

She said these low-paid workers were entitled to pay increases based on job evaluations from 2015.

Ms McDonald said there was no need for the Labour Court. “This is an absolute ball of smoke,” she said. There was no dispute “save that the Government will not keep its word and pay up what is due to these workers on the back of a job evaluation scheme that was agreed between the partners”.

Mr Murphy said that those on strike were “mere workers, low paid workers, not like the very high paid, well paid judges that you can agree to pay an increase”.

He also compared the delay in paying the HSE workers with the overruns in the national children’s hospital and the National Broadband Plan.

Mr Varadkar said he was well aware of the pressures and frustrations facing health support staff. He knew this from years of working in the health service - “not from visiting the picket line for a photo op.”

The Taoiseach insisted the Government’s policy on pay restoration was very fair and involved restoring pay to the lowest paid, then moving on to those on middle income and then move on to the highest paid.

“This dispute is about timing, it is about implementation of these additional pay rises. It has to be done broadly within budget and we have to bear in mind the consequent knock-on costs.”

“The equivalences you’re drawing with judges is a red herring,” he told Mr Murphy.

“Public sector pay is being restored for the lowest paid first. That’s done - for the middle incomes it will be extended to anyone earning up to €70,000 by the end of next year.

He said the public sector pay bill is €19 billion a year and the increase this year alone was €400 million, “multiples of the additional money we may need to find for the children’s hospital and the broadband plan”.

He said “those equivalences are just bogus and misleading”.