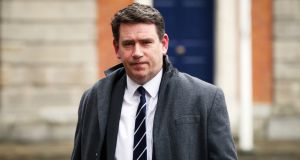 Waterford TD John Deasy has called for the entire Waterford Fine Gael organisation to be suspended and for party headquarters to intervene in the constituency. File image: Stephen Collins / Collins Photos

An unsuccessful local election candidate in Waterford has said that she intends to make a formal complaint to the party over alleged bullying and intimidation in the constituency.

Fiona Dowd, who attended a meeting in Dungarvan on Monday night which backed a no-confidence motion in local TD John Deasy, said there was “a complete mob mentality” at the gathering.

“I was completely intimidated, and I’m not easily intimidated,” she said, adding that she had been shouted down when attempting to speak.

She believed she was seen as being a supporter of Mr Deasy and “therefore I was given no respect in that meeting”.

“I will be putting in a formal complaint against some members...I’m asking Leo Varadkar to investigate my claims because it’s gone on for years, they are serious (claims) and it has to stop,” she said.

Ms Dowd said she planned to write to the Taoiseach and Fine Gael parliamentary party chairman Martin Heydon as there “is a festering and a mob mentality that is brewing” within the party.

John Fitzpatrick, the secretary of the Fine Gael organisation in Waterford, said that any complaint, if it was forthcoming, would be an internal matter for the party. “If she [Ms Dowd] has made an allegation, that deserves to be investigated thoroughly.”

A row developed in Waterford in relation to candidate selection in the local elections, which precipitated the resignation of Maurice Cummins, the former senator who was director of elections for the party in the county.

Tensions have further escalated following the no confidence vote in Mr Deasy, the Government’s special envoy to the US Congress. Sources who attended the meeting said the motion received near unanimous support from the estimated 60 members present at Lawlor’s Hotel.

He said that he had not heard anything about “abuse and bullying” in the constituency. “I reject it totally [and] I’ll be following up on that”.

Mr Coffey said the schism in the party was not a personal one between him and Mr Deasy, but was based on what he claimed was widespread dissatisfaction among Fine Gael members with the TD’s performance. The motion of no confidence in Mr Deasy was put forward by Mr Coffey’s brother.

The Senator said Mr Deasy “hasn’t attended meetings. Waterford Oireachtas members have attended numerous meetings with regard to one of the biggest issues in history locally, Waterford hospital. He attended one for five minutes”.

Mr Coffey also criticised Mr Deasy’s support of local election candidates and said he had not accompanied the Taoiseach or Ministers on constituency visits.

Mr Deasy called for the entire Waterford Fine Gael organisation to be suspended and for party headquarters to intervene in the constituency. He painted a picture of a constituency organisation at war with itself, saying his supporters had stopped going to meetings, such as that held on Monday, years ago.

“This is well beyond typical inter-party, internecine rivalries,” he said.

Mr Deasy also implicitly criticised how the leadership of his party had handled the dispute, saying: “Everyone in Fine Gael at the highest levels understands what’s been going on in Waterford for years, but have continually ignored it.”

Mr Deasy has been a TD for the constituency since 2002, having succeeded his late father, Austin.

Since taking up the envoy role in 2017, which has seen him working on issues such as achieving status in the US for undocumented, or illegal, Irish immigrants, Mr Deasy has been largely absent from the constituency.

Mr Coffey, from Portlaw, was selected as the sole Fine Gael candidate for the next general election at a selection convention in December 2017. Mr Deasy did not put his name forward at the convention. However, there was an expectation his name might be added to the ticket by party headquarters.