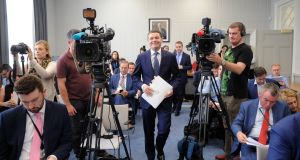 The Minister for Finance, Paschal Donohoe, arriving at the Department of Finance on Tuesday to deliver the summer economic statement. Photograph: Aidan Crawley

Taoiseach Leo Varadkar’s proposal to cut income tax by changing the point at which workers become liable for the highest rate will be postponed if there is a no-deal Brexit later this year.

Senior figures in the Government and Fianna Fáil, whose support is needed to pass a budget, have cautioned that extra spending not aimed at supporting businesses at risk due to Brexit would have to be significantly curtailed in such a scenario.

Minister for Finance Paschal Donohoe on Tuesday signalled that planned income-tax cuts would not be introduced next year if the UK crashed out of the EU without a deal. However, he said there would be scope to do so over the lifetime of the next government.

Significant social welfare increases would also be unlikely if there was a no-deal Brexit, Government figures said privately.

Mr Donohoe on Tuesday published the summer economic statement, which lays the parameters for the October 8th budget, which comes just weeks before the UK is due to depart the EU on October 31st.

The summer statement outlined the budget approach in the case of both a no-deal and an orderly Brexit.

Should there be an orderly Brexit, the Government will run a surplus of 0.4 per cent of GDP next year. However, a no-deal exit would see the surplus swing to a deficit of between 0.5 and 1.5 per cent, with deficits also posted up to 2023.

It would mean that, by 2024, €27 billion would be added to the national debt, which was €206 billion last year and one of the highest in Europe when compared with the State GDP.

The Government will make a decision in September on which Brexit outcome it believes will be the most likely, but the budget will be framed to suit both scenarios.

Mr Donohoe said the budget day package would be €2.8 billion. However, €1.9 billion of this has already been allocated for capital projects, public sector pay rises and demographic changes. A further €200 million “expenditure reserve” is being set aside to go towards the National Broadband Plan and the national children’s hospital, leaving €700 million available for new measures.

Mr Donohoe indicated that tax cuts – such as the Taoiseach’s plan to raise the threshold at which people hit the higher rate of income tax – would be off the agenda if there was a no-deal Brexit.

In a no-deal situation, the €700 million in discretionary spending – which could rise if taxes are increased elsewhere – is likely to be used to support at-risk sectors of the economy, such as agriculture where 55,000 jobs are seen as being at risk.

Michael McGrath, the Fianna Fáil finance spokesman, declined to be drawn on what specifics his party would push for in such a budget.

“Under no circumstances we will put at risk the Irish economy and the public finances,” he said. “If there is a disorderly Brexit, we are facing a scenario where that level of discretionary areas of the budget will be very limited indeed and that will apply across the board.”

1 Trump threatens to ‘close down’ social media companies after Twitter fact-check
2 Binoculars at the ready: Elon Musk rocket to be seen in Irish skies tonight
3 Sil Fox tells of ‘months of hell’ as he is cleared of sex assault on woman in bar
4 Dr Tony Holohan tells ministers no immediate change to 2 metre rule
5 Coronavirus: Denmark is reopening society quickly. How is it faring?
Real news has value SUBSCRIBE

Senior ministers insist heated discussion at Cabinet did not happen