Miriam Lord: Paschal hails the stabilisers as he pedals into the unknown

The Minister is a man with a plan, or rather two plans 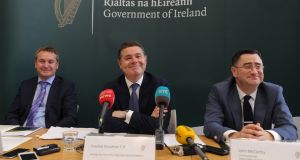 Minister for Finance Paschal Donohoe with Robert Watt (left), secretary general of the Department of Public Expenditure, and John McCarthy, chief economist at the Department of Finance. Photograph: Aidan Crawley/For The Irish Times

Paschal stands in front of the eye chart.

What do you see now, Minister?

“Aah yes, I see a lovely big letter A.

“No. Wait a minute please. I think that is a dirty big letter B.

And on it goes, probably until well past October 8th and long after his annual financial statement has been put to bed.

The Minister for Finance is in a quandary. He would like to enjoy 2020 vision when it comes to preparing next year’s budget, but this cannot be.

Brexit has blurred everyone’s fiscal outlook, including the man in Merrion Street who makes the bottom line decisions.

Nonetheless, Minister Donohoe was still obliged to deliver his summer economic statement on Tuesday, setting out how he intends to proceed on the money front despite the uncertain times ahead.

Should he go with Plan A? Or Plan B?

Because this will have an important bearing on our new pals the “automatic stabilisers” which were waved about with abandon in the wake of the summer statement. The financial spokespeople, from Government and Opposition, could talk of little else. They now look certain to replace “fiscal space” as the favoured financial cliché of budget season.

It must be very confusing for poor Paschal, having to come to terms with automatic stabilisers when he doesn’t even know if we’ll have an economic bell on our bike after the UK’s Brexit deadline on Halloween night.

These stabilisers are supposed to kick in and cool the economy when things are overheating and do the job in reverse when times are bad, but Irish governments have displayed a cavalier attitude to their steadying influence in the past.

They dismantled them when the economic wheels began wobbling dangerously, with predictably disastrous results.

Should Britain exit the EU in an orderly fashion, the Minister can reach for Plan A. But should the dreaded no-deal crash-out come to pass, he will have to resort to Plan B. Automatic stabilisers will be required one way or the other and, this time, the Government insists they will not be disregarded.

But rather in the way Boris Johnson wrote two newspaper columns before the UK voted on EU membership – one backing a remain vote and the other, which he chose to publish once he divined what way the wind was blowing, urging a vote to leave – Paschal has to adopt a wait-and-see attitude before implementing his final budgetary approach.

But difficult times lie ahead for the economy and for the Government. The summer statement was barely published before Opposition deputies claimed it indicated the Christmas social welfare bonus would fall victim to his budget tightening, leading to an immediate outbreak of buttock tightening among worried Government backbenchers contemplating the general election.

“I, at this stage, don’t have any plans to change our provisioning on that. It is a payment that is in our base; it is one that I’ll make a decision on on budget day regarding how we’re to handle it then,” said Paschal. He’ll need to be a bit more convincing than that to soothe his colleagues’ nerves.

In other business, we discovered that Micheál Martin got out his apron and Marigolds at the weekend and did a little light housework.

The result was a bombshell press release on Tuesday trumpeting his “Reorganisation of the Fianna Fáil Front Bench”.

Not so long ago, that statement would have been interchangeable with “Rearrangement of the deck chairs on the Titanic”, but the party has undergone a revival of fortunes since the bad old days of 2011 when the ship went down with most hands lost.

The Fianna Fáil leader was forced to move some of the furniture around because of Billy Kelleher’s departure to the European Parliament. In the process, he elevated Sligo’s Marc MacSharry to his first ever frontbench position.

It was the biggest news during a lacklustre day in Leinster House when the main action was taking place over in the Department of Finance with Pascal Dimplehoe and his automatic stabilisers.

The Dáil was buzzing after the announcement that Longford-Westmeath TD Robert Troy is to take responsibility for business, enterprise and innovation while TD for Sligo-Leitrim Marc Mac Sharry joins the front bench as spokesperson for transport and tourism.

Cometh the hour, cometh the MacSharry, said nobody.

Nonetheless, there are high hopes for the Sligo deputy in his new role. He will be shadowing Shane Ross, the biggest ham in politics. But if anyone can give him a decent run for his money, it’s the political prosciutto Marc MacSharry. He isn’t behind the door either when it comes to chewing the scenery.

Meetings of the Transport Committee may never be the same again, with any luck.

An inspired choice by Micheál.