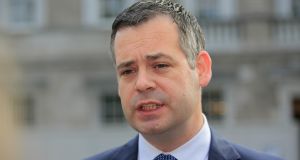 Sinn Féin finance spokesman Pearse Doherty said the figures ‘haven’t taken account of the fact that the Christmas bonus has not been factored in’. Photograph: Gareth Chaney/Collins

Minister for Finance Paschal Donohoe has rejected claims that the summer economic statement has not factored in the social welfare Christmas bonus payment, which costs the exchequer €300 million a year.

Sinn Féin finance spokesman Pearse Doherty TD made the claim as the Opposition sharply criticised the summer financial statement and accused the Minister of engaging in “fantasy figures”.

He warned Mr Donohoe that he must properly and openly address criticism of the Government’s spending policies by the Irish Fiscal Advisory Council, which said the medium to long-term figures were “not credible”.

In his statement, Mr Donohoe said the Government would have €700 million available for new measures in the October budget with a surplus of 0.4 per cent of GDP next year if there is an orderly Brexit.

However, Mr Doherty said the figures “haven’t taken account of the fact that the Christmas bonus has not been factored in”.

He cited comments by economist Colm McCarthy at the Oireachtas Budgetary Oversight Committee on Tuesday, who he quoted as saying that “there’s things that are unpredictable but Christmas appears every year”.

Mr Donohoe said the payment was “in our base and it’s one that I’ll be making a decision on budget day regarding how we’re going to handle it”.

The bonus is an extra week’s welfare payment made to social welfare recipients in the month before Christmas.

Mr Doherty repeatedly referred to “fantasy figures” and said “we are not having a debate that is rooted in reality”. He added that all the indications were that there would be a health overspend this year and that, along with the Christmas bonus, “takes away the €700 million immediately”.

Fianna Fáil finance spokesman Michael McGrath also warned the Minister that he was “duty bound to give a comprehensive response to the fiscal council’s report”, whose criticism was “stinging and quite damning”.

He also signalled his party’s continuing support for the confidence and supply arrangement and said the uncertainty around Brexit “underlines the need for political stability in our country”.

Mr McGrath said the figures painted “quite a stark picture” and he questioned Mr Donohoe’s comments that there would be two “quite radically different” alternative budgets with a decision made in September.

“That’s not what we’re getting today – the budget package is going to be €2.8 billion come what may, of which €2.1 billion is set in stone.”

He stressed that the core priority “has to be to protect the very basic frontline services rely on and at the moment they are under particular strain”.

Labour finance spokeswoman Joan Burton said there was no commitment from the Minister about how much of the €700 million was available for tax cuts, which the Taoiseach had said he wanted in Budget 2020.

People Before Profit TD Richard Boyd Barrett said that if there was €700 million available, “it is not enough”.