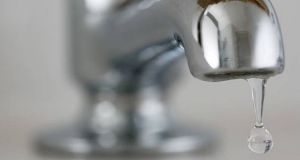 The old charging regime for water will come back into force if the committee’s recommendations are not agreed and sent to the Dáil for a vote. The Government’s nine-month suspension of the water charges lapses this month

The Oireachtas committee on water charges is to hold further votes on Wednesday on a number of key recommendations amid fresh disagreement between members.

The 20-members remain at odds over the introduction of a charge for excessive usage, the installation of meters in all new builds and allowing the Commission for Energy Regulation set a figure for normal usage of water.

The committee is now facing the possibility that it will fail to produce a final report, with several members, including Fine Gael, Labour and Solidarity TD Paul Murphy, opposing elements of the draft.

At the meeting on Wednesday members will put forward a number of amendments.

Fine Gael Senator Paudie Coffey said the wording of the report as it stood was disingenuous, and ducked Ireland’s obligations under the European Water Framework Directive.

He said the report must apply a levy for excess usage or his party could not support the final recommendations.

The Fine Gael Senator said this had become an issue of language, and he believed it could be resolved if the political will existed.

“It appears they have only read the the first page of a four-page report,” the Fianna Fáil TD said. “We all appeared to be on the same page last Thursday. Whoever interfered with those on the committee came back with a different attitude today.”

The old charging regime for water will come back into force if the committee’s recommendations are not agreed and sent to the Dáil for a vote. The Government’s nine-month suspension of the water charges lapses this month.

Sinn Féin TD Eoin O’Broin said he could not support an excessive usage charge or the installation of meters at new builds.

Solidarity and Independent TDs Seamus Healy and Thomas Pringle are understood to be in the same position.

Fine Gael and Labour are opposed to the commitment to fund domestic water usage through general taxation but they support such funding of “normal water usage”.

Both are also committed to introducing a charge for excessive usage, and insist they will not support any report which fails to address this.