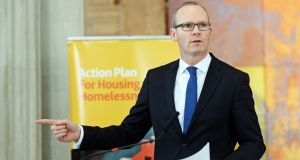 Simon Coveney: he said the report’s wording as it stood was an attempt to fool the public into believing a water charging regime was no longer in place 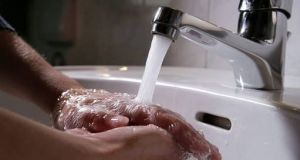 Fine Gael requested a number of further amendments to the recommendations, including a financial penalty for excessive usage of water. File photograph: Getty Images

Fine Gael and Labour are threatening to withhold support from the final report of the Oireachtas committee on water charges, arguing that the current draft breaches European law.

The committee descended into chaos on Tuesday as members held a series of votes on the first chapter of the draft report which examines the funding of water services.

However, the dispute among members escalated, with Fine Gael requesting a number of further amendments to the recommendations, including a financial penalty for excessive usage of water.

Fine Gael will now propose householders who use 70 per cent above normal usage will receive a notification advising them they are wasting water.

Minister for Housing Simon Coveney told The Irish Times the introduction of a levy or a charge was required to meet Ireland’s obligations under European law. He said the report’s wording as it stood was an attempt to fool the public into believing a charging regime was no longer in place.

The Minister said: “If we do not have the principle of charging people who use excessive amounts of water then, in my view, we have no chance of being compliant with a legal directive we signed up to as a country.

“There is a point where Fine Gael cannot go beyond here. We need to comply with the water framework directive.”

Under the Fine Gael plan householders using 70 per cent above normal usage will be given six months to take corrective action, and if this does not happen a financial penalty will be applied. The party will oppose the word “fines” because it will allow for individual householders to be taken to court.

Fine Gael is also seeking to reverse a vote taken by the committee on Tuesday which allowed for the term “normal water usage” to be replaced by “domestic water usage”.

The party believes this is also problematic under EU law, but it is unlikely a second vote will be held.

A number of the committee members expressed frustration with Fine Gael’s hardening of its stance, insisting agreement in principle had been reached last week.

He said this had become about internal Fine Gael matters, and the committee’s work had now been tainted by party matters.

The 20-members will meet again on Wednesday, with a number of amendments to be discussed on metering, charging and refunds.