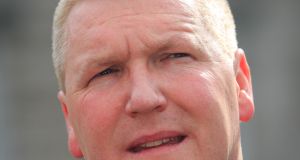 Michael McGrath said an issue appeared to have arisen in areas insurance such as employer liability and public liability ’because of the lack of predictability and the inconsistency in court awards’. Photograph: Gareth Chaney Collins

Some companies are taking the risk of going without insurance to stay in business, because they cannot afford the premiums, the Dáil has heard.

Fianna Fáil finance spokesman Michael McGrath made the claim as he pointed to the increases in premiums, which he said had doubled in some cases.

Mr McGrath said an issue appeared to have arisen in areas insurance such as employer liability and public liability “because of the lack of predictability and the inconsistency in court awards”.

He added that “in some cases, businesses are taking the risk of not having any insurance at all. They are being forced to take that crazy risk so that they can stay in business.”

The Cork South-Central TD said he wanted to see a sense of urgency from the Government in tackling the issue. “We will hold the Government to account on the implementation of the good report that has been produced on the motor insurance issue.”

He raised the issue during finance questions as he queried the status of the second phase of the cost of the insurance working group.

He said “there has rightly been a significant focus on motor insurance in recent times, but there has been less of a focus on business insurance”.

Mr McGrath said that in one case the excess was €10,000 for each employer and public liability claim.”Brokers are keeping the show on the road, and many are going to extraordinary lengths to represent their clients and get the best deal they possibly can from insurance companies.”

Minister of State Eoghan Murphy acknowledged a “worrying” trend in self insurance where businesses do not take out insurance but set aside a certain amount of funding to deal with potential risks.

He said companies could be “putting their entire business at risk if they encounter a problem in the future against which they had not provisioned. It is a worrying trend.”

Mr Murphy, who chairs the insurance working group, acknowledged the urgency and pointed to the “very big hit” the hospitality sector was taking on insurance premium increases.

The industry “has tried to control this risk by shutting down particular parts of businesses, such as nightclubs or the hosting of weddings”.

But he said these services were part of the viability of businesses in the first place, “therefore they cannot portion out that part of their business”.

The working group had identified particular problems, including businesses taking on higher excesses which made it difficult for them to manage their bottom line.

He said they were also considering the role brokers could play. “Fraud is also important. We are receiving very good information from businesses on how fraud is affecting their businesses.”

Ways to bring greater consistency to the awards process were also being examined, such as the personal injuries commission and the Personal Injuries Assessment Board (PIAB), whose powers would be increased in the next three months, Mr Murphy said.