TDs engage in wilful and excessive one-upmanship on water committee 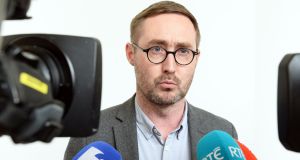 Eoin Ó Broin declared that Fine Gael was trying to introduce water charges by the back door. And probably water meters by the front gate. Photograph: Eric Luke

Quick! Switch off the immersion. The water is heating up again. Bile notices went up all over Leinster House yesterday.

The excitement was out on the plinth. By late afternoon, the four main parties were queuing up to pronounce on the latest shambolic twist in the water charges fiasco.

As we know, the Oireachtas Water Torture Committee has been meeting for many months to divine a peculiar form of alchemy; how to find a magic way to pay for water without paying for it.

Nineteen meetings so far, involving all parties and strands of political opinion.

It seems that at the end of last week, this motley assortment of deputies and TDs arrived at a position known as “Agreement in Principle”. Or so they thought.

Yesterday, they gathered to approve a document drawn up to enshrine the result of their long deliberations.

They fell out, followed by a flurry of forays to the microphones.

The arguments were all about language. What is a charge? When is a fine a charge? Can a penalty be called a levy?

When it transpired that one of the reasons the talks had broken down was because some participants wanted the word “normal” removed from the phrase “normal domestic water,” it was proof that this sorry mess has finally reached peak preposterous.

Normal was duly voted out the window.

The arguments were all about language. What is a charge? When is a fine a charge? Can a penalty be called a levy? And is it possible to stomach any of these words when they are matched with such explosive descriptions as “wilful” and “excessive” and “wanton”?

Should TDs be fined or charged for wilful and excessive one-upmanship, for example? Should they be penalised for wanton can-kicking or levied for blatant populism? The committee has until Good Friday to reach agreement. Yesterday, when presented with a five-page document, they couldn’t get past the opening paragraph on the first page.

Sinn Féin was happy with the idea that normal domestic water use would be financed through general taxation but insisted “normal” be scratched. Fianna Fáil agreed. Fine Gael most certainly did not. Labour followed suit.

The AAA/PBP Solidarity party and sundry independents couldn’t be doing with normal either.

Both sides insisted what they wanted was what had been agreed last week.

So first out onto the plinth was Eoin Ó Broin, without the usual doughnut of Sinn Féin faces around him, who declared that Fine Gael was trying to introduce water charges by the back door. And probably water meters by the front gate.

Next to arrive was the Fine Gael contingent. Word went around that they had been nipping in and out of the meeting to talk on the phone to their line minister, Simon Coveney who, it was rumoured, underwent some sort of a conversion over the weekend and was now adopting a hard-line approach.

This, however, may have been a story put out by people attached to Fianna Fáil. As it was, when Barry Cowen barrelled out to put his party’s position, he kept hinting that the reason for Fine Gael’s “surprising” insistence that the report must make it clear there will be charges for wilful wastage of water was all down to “internal” politics. (A reaction to a reaction from Leo Varadkar, was what people were putting about.)

Maybe they will go home and “reflect” and come back with a new attitude today, he patronised.

But when Bruiser Bazza was put on the spot and asked to explain what Fine Gael “internal politics” he was referring to, he couldn’t. “I don’t know” he replied. “That’s an opinion I have. It mightn’t be the right one.”

Meanwhile, the Fine Gael contingent was adamant that if the changes other politicians wanted to make in the report were adopted, the charges regime would not comply with the EU Water Directive. “It is not possible for the Government to legislate for an illegal act,” said TD Alan Farrell.

Cowen kept repeating he was 'baffled'. Who wasn’t?

Pull a fast one

The six FG members felt other parties were trying to change what they agreed in principle last week. They, for their part, insisted the Government party was trying to pull a fast one.

Cowen kept repeating he was “baffled.”

When his group left, there was a wait before the Fianna Fáil team arrived.

Time was marching on. Some journalists were fretting about teatime deadlines.

At this stage, it’s a complete farce . . . Complete fudge. Fianna Fáil and Fine Gael are in disarray

“They’re on their way” said a handler. “You had to wait for Fine Gael.”

Last to the plinth was Labour. Jan O’Sullivan made a lot of sense.

“At this stage, it’s a complete farce . . . Complete fudge. Fianna Fáil and Fine Gael are in disarray today,” she sighed, saying making people pay for their excessive water use “is the only rational way to charge”.

Otherwise, she argued, other people will end up footing the wasters’ bills.

“Socialist leader, Paul Murphy, is leading them in a drip, drip . . . of following him on.”

By last night, the water committee was in a state of chaos.

“There’s so many cans down the end of this road that we’ll need a recycling plant to deal with them all,” said an exasperated O’Sullivan.

For those who like their confusion on the silly side of bedlam, this New Politics is a dream.