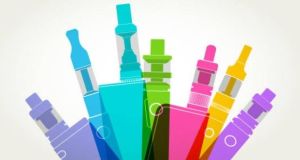 While tobacco sales to minors are prohibited there are no laws that prohibit the sale of “related products” such as e-cigarettes, vaping refill containers or herbal cigarettes to young persons. Photograph: Getty Images

A draft scheme to introduce a ban on the sale of e-cigarettes to under-18s and on the sale of tobacco products from vending machines at venues where children might be present will be considered by the Joint Oireachtas Committee on Health next month.

It is hoped the legislation will be passed in early 2020.

Minister for Health Simon Harris received Cabinet approval last week for new legislation which will further restrict tobacco sales 15 years after the ban on smoking in the workplace was introduced.

While tobacco sales to minors are prohibited at present there are no laws that prohibit the sale of “related products” such as e-cigarettes, vaping refill containers, or herbal cigarettes to young persons.

The proposed legislation will ban the sale of e-cigarettes to under-18s and also prohibit vending machines at locations or events where children are likely to be present.

It will introduce a new licensing system requiring shops to pay an annual fee to the State if they wish to sell tobacco products and nicotine products, including vaping devices. A separate licence for each individual shop where the products are sold will be required.

There will also be “additional enforcement tools”, the Government said, including fixed penalty notices and a name-and-shame list for shops which fail to adhere to the rules.

If a retailer is found to be in breach of that law he or she will face similar fines and penalties to those set out in existing tobacco legislation.

Electronic cigarettes, which allow tobacco to be inhaled by steam rather than by smoke, have been increasingly used as a substitute for smoking, and the big tobacco companies are behind most of the bigger players in the market.

As of now the sector is unregulated despite warnings from public health professionals that a growing body of evidence shows such products can also be seriously harmful to health, as well as being addictive.

The ban on smoking in public places does not apply to e-cigarettes at present, although most premises do not allow e-smoking indoors.

A Fine Gael colleague of Mr Harris had completed work on his own Private Member’s Bill regulating e-cigarettes just as the Minister for Health announced he would bring legislation on vaping to Cabinet.

The Dublin Fingal TD Alan Farrell spent several months working on the Public Health (Electronic Cigarettes and Herbal Cigarettes) Bill 2019, which proposed to deal legislatively with this new phenomenon for the first time. He was unaware his senior colleague was also working on the same proposals to regulate this new area.

The EU has been slow to respond to e-cigarettes and related products. There is a directive on tobacco dating from 2014, which sets out recommendations that prohibit the sale of tobacco products to young people.

However, there is no provision at present to deal with any of the new nicotine products such as e-cigarettes, vaping pipes, and herbal cigarettes that have entered the market since then.