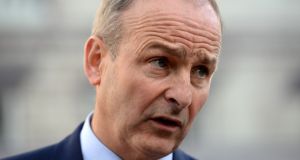 Fianna Fáil TDs Timmy Dooley and Niall Collins have been formally removed from their positions on the front bench.

He was speaking in the Dáil during a debate on the controversy which erupted when Mr Collins, the party’s former foreign affairs spokesman voted six times on behalf of Mr Dooley who was absent from the House during votes last week.

Mr Martin had initially asked them to step aside pending the outcome of the report commissioned by the Ceann Comhairle into the controversy.

Government Chief Whip and Minister of State Seán Kyne said the TDs involved “have done a grave disservice to their mandate, to their constituents and to their colleagues”.

He said “it was wrong. It was thoughtless. It was cavalier. And it was arrogant.

Mr Martin said “at the core of what has happened is the fact that we, unlike other parliaments, do not require members to use a card or other device during voting and we have a common practice of members speaking and voting from different seats”.

This was bad practice and should stop. But he accused Fine Gael speakers in the debate of making partisan comments.

To jeers and heckles from the Government benches he said there was no evidence they were “addressing any matter that had any impact on deciding the outcome of a Dáil vote”.

But Mr Martin added that it did not diminish the fact that “what happened was wrong”.

The Fianna Fáil leader also defended party colleague Lisa Chambers who voted twice in the Dáil but did not tell the teller at the time. Mr Martin said he was satisfied with her “good faith and the apology she made”.

Mr Martin hit out at the notion that a “Fine Gael-Sinn Féin coalition” were seeking an extreme sanction “which would mean that Dáil Éireann would introduce a greater sanction than has ever been applied” for those misleading the House or libelling members of the public.

But Sinn Féin leader Mary Lou McDonald said “one can only imagine the outrage of Micheál Martin had it been any other TDs but those from Fianna Fáil”.

Ms McDonald said this isn’t about electronic voting. At the core it was about the “contempt for the institutions of Government”.

She asked “do we need to tell Fianna Fáil that it’s not okay to vote twice” and she said there had to be a consequence for them for that.

But Independent Catherine Connolly TD accused Fine Gael of using the Dáil as a “star chamber to score points” and said Mr Martin’s speech was “disgraceful” when he should have just apologised and sat down.

People should “stand up, apologise and take whatever consequences the committee next week decides”.

Labour leader Brendan Howlin described the controversy as an “inter-party slug-fest” and said “the war of the buttons has fed into a very unwelcome narrative on public confidence in politics and it has also distracted from real issues of concern”.

But the House was being distracted from “the real issues of public concern”, including homelessness.