Bridge linking Northern Ireland and Scotland should not be dismissed - Varadkar 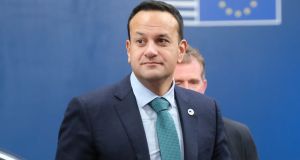 Leo Varadkar arriving for the second day of a two-day summit of European Union leaders in Brussels on Friday. He said the idea of a bridge linking Northern Ireland to Scotland “needs to be looked at”. Photograph: Sean Gallup/Getty Images

The proposal to build a bridge between Northern Ireland and Scotland should not be dismissed out of hand, Taoiseach Leo Varadkar has said.

“I know people dismiss it, but I don’t. It needs to be looked at, it needs to be at least examined,” Mr Varadkar told the Sunday Times while in Brussels.

British prime minister Boris Johnson has previously come out in favour of what would be a massive infrastructure project linking Scotland and Northern Ireland.

“Prime minister Johnson is genuinely interested in taking a serious look at this idea of building a bridge between Antrim and Scotland,” Mr Varadkar said.

“I’ve seen what the Chinese have got … 100km-long bridges. I don’t know if it is viable but I also don’t think it should be dismissed out of hand, and I know he is particularly excited about that one,” he said.

The road connection between Northern Ireland and Scotland has previously been promoted by the Democratic Unionist Party.

Speaking at a hustings event during the Conservative Party leadership race in July Mr Johnson said he was “an enthusiast” for the proposal.

“I’m going to put it out there, I think it’s a good idea but again that is the kind of project that should be pursued by a dynamic Northern Ireland government championed by local people with local consent and interest, backed by local business and mobilised by the politicians in Northern Ireland,” he said.

Mr Johnson has previously said the estimated cost of the project would be around €17 billion.