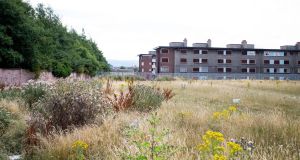 Dublin city councillors approved by 39 votes to 18 a plan which would see more than 800 new homes on the O’Devaney Gardens site. Photograph: Tom Honan

A plan to buy additional homes in O’Devaney Gardens for affordable rental housing will “not compromise” the regeneration deal with developer Bartra, Lord Mayor of Dublin Paul McAuliffe has said.

Two weeks ago, Dublin city councillors approved by 39 votes to 18 a plan which would see more than 800 new homes on the site of the former flat complex close to the Phoenix Park.

Minister for Housing Eoghan Murphy subsequently wrote to Mr McAuliffe to express concern in relation to the basis on which a deal had been approved by councillors.

In advance of the meeting on November 4th, Fianna Fáil, Labour and the Social Democrats, known as the “Dublin Agreement Group” released a statement saying they had “secured a commitment” from Bartra that it would sell 30 per cent of the homes to the council or a nominated housing body for use for affordable rental.

Mr Murphy said he would be providing funding to the project based on the 50 per cent private, 30 per cent social and 20 per cent affordable purchase mix. He said he was concerned the Dublin Agreement Group’s statement in relation to the 30 per cent affordable rental may have caused “confusion” because he said there was “no new agreement between Dublin City Council and Bartra”.

In a letter circulated to councillors on Monday night, Mr McAuliffe agreed the 50 per cent private, 30 per cent social, and 20 per cent affordable housing mix had been approved by councillors and said a deal with Bartra in relation to the affordable rental units would be “an entirely separate matter to the public procurement process already undertaken and does not compromise it”.

Meanwhile, councillors decided to defer voting on the council’s 2020 budget for one week, to seek talks with the Government to restore €8.4 million in rates owed by Irish Water.

Mr Keegan, said “inadequacies” in funding from central Government meant charges would have to increase and there would also be less money available for local services.

In particular, he said the council would lose rates income of €8.4 million on Irish Water-owned properties, and would not be compensated by central government despite prior assurances to the contrary. The Government has decided to redistribute the money owed on Irish Water properties in the city to other counties.

Social Democrats councillor Garry Gannon said the Fine Gael Government “owes this council money” and the citizens of Dublin should not “have to endure this spoiled brat of a housing Minister”. Independent councillor Cieran Perry asked that his fellow councillors not delay the meeting longer than necessary as Ireland was playing a soccer match later in the evening.

The Lord Mayor said while the council had a responsibility to pass a budget he would agree to the deferral to seek the restoration of the €8.4 million. The council must pass a budget by the end of this month, or it risks being dissolved by the Minister for Housing.

Meanwhile, South Dublin County Council has approved a €256 million budget which includes a €3 increase in all social housing rents and the removal of a €10 rent allowance for pensioners, which will result in a rent increase of €676 for over- 65-year-olds next year.

Dramatic Al sets the stage for a dark day of reckoning