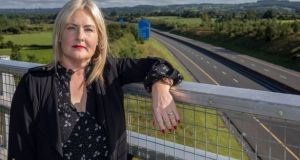 Verona Murphy told The Irish Times Isis is ‘a big part of the migrant population’ in Ireland. Photograph: Dylan Vaughan

Fine Gael’s by-election candidate in Wexford Verona Murphy has apologised for saying Islamic State (Isis) is “a big part of the migrant population”.

Ms Murphy made the comments to The Irish Times while canvassing in Wexford last Friday when she also said services were needed in Ireland to “alleviate that type of indoctrination”.

In a statement on Monday night, she apologised “wholeheartedly” after visiting an emergency reception and orientation centre.

“I realise now I had a poor understanding of asylum issues and I apologise wholeheartedly for my remarks,” she said.

Over the weekend, Ms Murphy became embroiled in controversy when she told RTÉ on Sunday she believed some asylum seekers coming to Ireland had to be “deprogrammed” as they “carry angst” from being in conflict zones. She also said some asylum seekers may have been “infiltrated by Isis”.

Ms Murphy apologised for these comments on Sunday.

In her comments to The Irish Times, Ms Murphy said Isis was a “big part” of the overall population of migrants in Ireland and society needed to protect itself from such indoctrination.

Asked on Friday if she had experienced anti-migrant sentiment while canvassing, Ms Murphy replied the most important thing was to not return to the type of conflict seen during the troubles in the North.

She said many people coming to Ireland were coming from conflict zones and “we we have to start to realise that”.

She also referenced the recent controversy in Oughterard, Co Galway where two weeks of protests by residents in the area prompted a developer to withdrew a plan to redevelop an empty hotel as a direct provision centre.

“If you look at what they were proposing in Oughterard, that was very overpowering. I myself believe that we do need to integrate these people in a way that they almost have to be re-programmed.”

“Now that is a terrible way...it sounds callous, but I am under no illusion that Isis is a big part of the migrant population,” Ms Murphy told The Irish Times.

“We have to protect our own society and we do have to integrate them [asylum seekers], we do have to give them the support services to alleviate that type of indoctrination and I think that is where Oughterard people were coming from.”

Ms Murphy said those objecting to the direct provision centre in Oughterard were not racist “but the services were not going to be available. It is very difficult for people to come in and integrate in a normal setting.

“Oughterard is extremely rural and in that case, I would be saying that, they were right.”

She said the reasons for their objections were portrayed incorrectly “because of Noel Grealish’s comments”.

She also said there was “misinformation” in the debate on migration in Ireland.

Minister for Justice Charlie Flanagan said her comments were based on “rumours and misinformation.”

“Verona has acknowledged that her statements on asylum seekers and refugees were not based on fact.

“She has apologised for her remarks. It is a sad fact that this kind of misinformation is now threatening to take root in our country, spread sometimes maliciously and sometimes naively, through various channels including on social media. I believe that public representatives and those running for election must step up and confront fabrications.”

Ms Murphy, who is the president of the Irish Road Haulage Association, came under pressure from her own party on Monday when Fine Gael TD Noel Rock said her remarks were “ignorant”, “ill-informed” and “dangerous”.

Fianna Fáil said the remarks were “sinister” and Labour leader Brendan Howlin called on the Taoiseach Leo Varadkar to disassociate himself and the Fine Gael party from them.