Nigerians in Ireland shocked and concerned by Grealish comments

‘There are lots of Nigerians who are very highly qualified, work hard and pay all their taxes’ 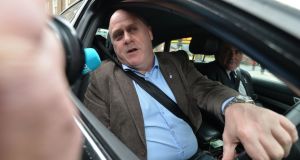 Members of the Nigerian community in Ireland have reacted with a mixture of shock and concern at controversial comments by Independent TD, Noel Grealish over personal remittances to Nigeria.

Yemi Adenuga, a Fine Gael member of Meath County Council who comes originally from Nigeria, said it was very unbecoming of a member of the Dáil to make such inflammatory remarks.

“It is quite dangerous but not the first time for Mr Grealish,” said Ms Adenuga.

She expressed concern that Mr Grealish’s latest comments had followed on from his observation made during a protest about a proposed direct provision centre in Oughterard, Co Galway last month when he described economic migrants from Africa as “spongers”.

Ms Adenuga, who is Ireland’s first black female councillor after she was elected for the Navan area in the local elections earlier this year, said Mr Grealish seemed to criticise Nigerians for not working in his earlier remarks and now had difficulty with those who were working sending money home.

“He’s trying to turn one group of people against another group and that’s not right,” she added.

While Ms Adenuga said Mr Grealish was entitled to raise questions about the legality of the proceeds of remittances abroad, she said the manner in which he framed the question and his motivation for doing so were a concern.

“He has put the idea in the minds of people who are far-right and it is driving conversations online which are portraying Nigerians as people who are remitting money made from crime,” she said.

Ms Adenuga said she took some comfort from the vast majority of Irish people being smart and intelligent, and they would realise what Mr Grealish was about.

“However, if it’s not dealt with, his views will grow in influence,” she warned.

“Noel Grealish is inciting people to be angry at the wrong thing for the wrong reason,” said Ms Adenuga.

The councillor, who came to Ireland in 2000 , said she had received an abusive phone call on Wednesdaythat challenged her right to raise questions about Mr Grealish.

Larry Ovie, a Nigerian pastor based in Mr Grealish’s Galway West constituency, said he was saddened by the TD’s comments which he termed “unacceptable”.

He expressed hope that other politicians including the President, Michael D Higgins, would call Mr Grealish to order over his remarks.

Ashimedua Okwonko, a Nigerian and chairwoman of AkiDwA, a network of migrant women living in Ireland, said she believed Mr Grealish’s comments were “an attempt to use his position to incite some form of prejudice” and “a pattern of a growing trend”.

“Many migrants are in high positions and there are lots of Nigerians who are very highly qualified who work hard and pay all their taxes,” said Ms Okwonko.

She claimed many worked long hours of overtime for the specific purpose of earning money to send back to family members in Nigeria.

“Every family in Nigeria has to be its own government and provide goods and services that the government does in Ireland. We send money back to help our families pay for things like electricity, clean drinking water and medication.”

Ms Okwonko said Irish people should also be aware that many Nigerians were raised by their community with non-family members assisting with the cost of their education and many felt a duty to pay back money when they had a good job.

The Immigrant Council of Ireland said it was “very disturbed” by Mr Grealish’s comments and how an elected representative had used a public platform to scrutinise one group in a very negative manner.

The ICI’s communications and advocacy manager, Pippa Woolnough, said the organisation was particularly concerned that the independent TD had been provided with an evidence-based response to a parliamentary question he posed on the scale of remittances by Nigerians living in Ireland a few weeks ago.

Ms Woolnough said she wondered why Mr Grealish had decided to focus on a different set of figures from the World Bank.

The Nigerian embassy in Dublin did not respond to a request for comment.