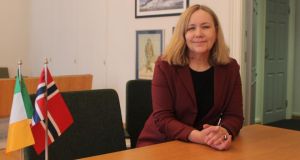 Brexit negotiations: the Norway-Sweden border is frictionless but not invisible, according to Else Berit Eikeland

A “Norway-plus” model for the UK after Brexit, as proposed last month by the Taoiseach, could effectively amount to continued membership of the European Union, Norway’s ambassador to Ireland has said.

Else Berit Eikeland said adding a “plus” to Norway’s existing membership of the European Economic Area and its full access to the EU single market would mean the Nordic country joining the customs union and that this would essentially be full EU membership.

Norway, as a European Economic Area member, has signed up to the single market’s free movement of people, goods, services and capital. As a member of the European Free Trade Association, the Scandinavian country pays for access to the single market but is exempt from EU rules on agriculture and fisheries.

The British government has ruled out remaining in the single market and the customs union, the EU’s tariff-free trading area, after it quits the bloc in March 2019, as it wants to strike its own trade deals with other countries.

At the World Economic Forum in Davos last month Leo Varadkar said that the Government would prefer a bespoke “Norway-plus” agreement with the UK but that Brexit negotiators would have to “get into the detail now of what that means”.

The British prime minister, Theresa May, has ruled out the Norway option and said last week that London wants a bespoke arrangement with the EU.

Ms Eikeland said that it was understandable for Mr Varadkar to “look at different models” but she was still unclear about what the Taoiseach was proposing. “When the Prime Minister said ‘Norway-plus’ I was kind of, ‘What’s Norway-plus? Is it single market and customs union?’ That is [EU] membership. Or is it something else?”

The ambassador said that in principle Norway’s parliament can decide whether to align itself with each piece of EU legislation but that a similar demand by the UK could complicate trade. “It would be very demanding to have access to the single market if parliaments outside the EU would pick and choose too much, because trading today is about having the same description of goods.”

Ms Eikeland said that there was a misunderstanding about the border between Norway and Sweden, its EU neighbour. “It is not an invisible border compared with how the Border between Ireland and Northern Ireland is functioning today, where you can just drive and nobody would stop you.”

Describing the Norway-Sweden border as frictionless, she said that vehicles carrying exports must still stop briefly to have papers stamped but that there are no Irish-style “political sensitivities”.