Forget Boston and Berlin: let’s look to Canada for our economic model 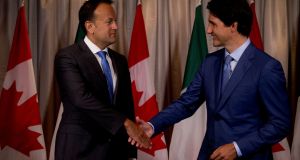 Leo Varadkar and Justin Trudeau. “If there are lessons from other countries I would take a glance at Canada. Another country where inequality is relatively low and where immigrants are welcomed with open arms.”

What kind of economy do we want? Boston or Berlin? Ireland is often asked that question when thinking about strategic economic – and social – direction. As another national development plan is unveiled, what are our priorities? Sitting, sometimes uncomfortably, between two starkly contrasting models, it is, perhaps, a reflection of lack of national self-confidence that we look to others for assistance.

The various ways in which the Republic made so many economic missteps on the road from almost total dependence on agriculture to a modern diversified (sort of) economy also help to explain why we seek advice from others. The memory of our own recent version of boom and bust (and now boom again) naturally makes us nervous about any claims to a successful development model that has, maybe, uniquely Irish features.

However, there are reasons to make this claim. We have one of the most equal societies in the world, thanks in no small part to the taxation and welfare system. Critics carp that large-scale redistribution – that’s what all the social spending achieves – just papers over a relatively low wage economy, at least in some sectors. Pragmatists might just be grateful for jobs of any kind.

Reliance on multinationals and the inward investment they bring is, of course, part of the story. But whether you think this is desirable or not, or whether the methods used to attract those industries are a good or bad thing, it is clear that it is something we excel at. As the tectonic plates of global corporation taxation slowly shift, we will find out just how important our young, highly educated workforce actually is. For all sorts of reasons, I suspect that Ireland will remain an attractive place to invest, notwithstanding the likely shrinking of tax arbitrage opportunities.

Ireland should be grateful that economic development skipped a generation. There never were any large coal, steel or auto industries – the running down of which, in the teeth of globalisation and technological change, is causing so much strife in the UK and US (but, importantly, not so much in Germany).

As Brexit-related job losses start to hit the British motor industry – before they have even left the EU – we can only stare in astonishment at the strength of the Leave vote in towns where the auto industry is still a large employer. As Christine Lagarde, boss of the IMF, said recently: the experts were right, Brexit is already badly damaging the UK economy.

Unlike both the US and UK, the Republic does not have a dominant political class in thrall to a few rich old men. The British and American ways of funding political parties and control of the media is not something, for the most part, that has corrupted our way of doing things.

In this and in other ways we are not involved in the intergenerational civil war that is now raging on both sides of the Atlantic. The best hope of the anti-Brexiteers is that the process can be dragged out long enough for all those old men, rich and poor, who voted to Leave, to die.

If demography is destiny then we have another reason to be cheerful. Our population is relatively young and plenty of people around the world want to come to live and work here. And that’s something else to celebrate. Ireland has welcomed more immigrants than the UK (relatively) and is utterly relaxed about this. For all of Brexit’s complexities and psychoses, Theresa May’s number one objective is to reduce the number of pesky foreigners. It is a meanness of spirit, a poverty of imagination and an inward-looking vision that is so obviously missing in the Irish.

Inequality comes in many forms. And has many drivers. It is the ways in which the British and the Americans educate children and young adults that contributes most to economic civil war. Before conception, the elites in both countries have figured out the way in which their kids can be educated in an Ivy League university in the US, or Oxbridge in the UK. Contrary to popular mythology, the number one dinner party conversation in Britain is not house prices. It’s getting children into Oxford or Cambridge. Winner takes all starts with education.

If there are lessons from other countries I would take a glance at Canada. Another country where inequality is relatively low and where immigrants are welcomed with open arms. A country that has set its face firmly against educational apartheid. It is telling that Canada does not have the same elite university system as in Britain or America.

There are plenty of very good universities and nothing like an Ivy League, no pathological focus on elite college entrance requirements for the first 18 years of a child’s life. Canadian school teachers are well paid, trained, valued and educate children in state schools who, country wide, score very highly in international league tables. A focus on infrastructure is necessary in any development plan. But investment in the right education system is at least equally important.

As we watch our neighbours sink ever deeper into nativism we need to be on guard for anything that sucks us into similar madness. In a way, answering the big strategic questions has become easier. What not to do is very obvious.