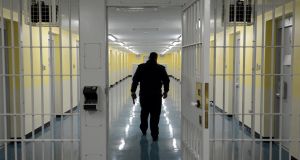 Almost 60 prison officers are on long-term sick leave from the Irish Prison Service for stress or injury due to assault in the State’s 12 prisons and places of detention, new figures show.

The prison service defines long-term sick leave as being absent for a continuous period of 92 days or more. Absences considered occupational injury or disease-related allow for six months on full pay followed by six months on half pay.

A serious physical assault scheme was introduced in 2015 which in certain cases allows for full pay up to a maximum of 12 months.

Minister for Justice Charlie Flanagan provided the figures in response to a parliamentary question and said the scheme was a “considerable benefit for the small number of staff affected”. It was an interim arrangement pending the completion of a full review of occupational injury or disease in the public service, being carried out by the Department of Public Expenditure and Reform.

Responding to a questions from Fianna Fáil’s justice spokesman Jim O’Callaghan, the Minister said the prison service was introducing a system that provides guidance to staff on critical-incident stress management.

Mr Flanagan said other supports included a free, confidential counselling service for all prison staff to help officers resolve personal or work related concerns and provision for an early return to work for staff after a period of sickness “where an employee may not be fit for a full range of operational duties”. This rehabilitation period is for a maximum of three months following advice from the office of the chief medical officer.

Mr O’Callaghan said that “many prison officers are exposed to violence and stress in their jobs. It is important that the State provides adequate support services for all prison officers.”

The Dublin Bay South TD said that “where they are injured during the course of their employment there is an obligation on the State to ensure that they are provided with an appropriate and prompt remedy through the criminal injuries compensation tribunal”.

Mr Flanagan told him that information on the compensation tribunal and other supports for staff injured on duty is available through the prison service’s employee assistance programme.