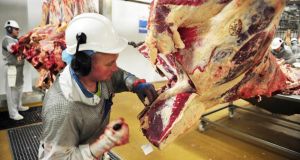 Cost of Brexit: Copenhagen Economics estimates that the UK’s departure from the EU will cause the value of output from key parts of the agrifood sector to fall between 10 and 20 per cent by 2030. Photograph: Aidan Crawley/Bloomberg

Debate here about Brexit so far has focused on the Irish Border. Copenhagen Economics’ report for the Government demonstrates that a lot more than this key political factor is at stake. And central to all this are the food sector and rural Ireland.

The food industry is the most exposed sector of our economy to Brexit, particularly subsectors such as processed foods, beef and dairy. The report estimates that the UK’s departure from the European Union will cause the value of output from these key parts of the agrifood sector to fall between 10 and 20 per cent by 2030.

The IFA said it was not surprised by the ‘catastrophic outcome’ of a hard Brexit. It is not known for understatement, but in this case it is hard to argue

The Irish Farmers’ Association said yesterday that it was not surprised by “the catastrophic outcome in the event of a hard Brexit”. It is an organisation not known for understatement, but in this case it is hard to argue.

We have tended to look at Brexit as something that will hit our overall economy. But you also need to look from the bottom upwards, and the big threat is to a few key sectors, led by food. Other areas of the economy will not suffer the same direct hit but will feel the effect of less economic activity, higher prices caused by rising import costs, and the general upheaval that Brexit will cause. More than half of all Irish exports to markets outside the UK, for example, move over the so-called UK land bridge – through the UK by truck and on to the Continent – and it remains unclear how much disruption, extra costs and delays will be caused here.

The overall impact on the economy will be significant enough. In the case of a hard Brexit, no trade agreement between the EU and UK, and the imposition of World Trade Organisation rules, Irish GDP could be 7 per cent lower by 2030 than it would otherwise have been, with a nasty 2 per cent hit by 2020. The economy might grow by 1.7 per cent per annum on average in the years ahead, compared with an estimate of 2.2 per cent without Brexit.

The Copenhagen Economics report examines a range of other scenarios, from a new free-trade deal between the UK and EU, the UK staying in the customs union, and the UK staying in the European Economic Area, like Norway. These would cause less damage, but Ireland would still be worse off by at least 2.8 per cent of GDP by 2030.

To understand where the risk comes from, you need to look at the detail. By 2030, exports to the UK could be 50 per cent lower than would otherwise be the case. Food is at the forefront in terms of economic risk.

In processed foods, for example – meat products, bread, biscuits, cereal-based products and so on – Irish-UK trade is greatly boosted by common labelling, safety and inspection requirements. If these go, and new tariffs and customs duties are also added, exports from this sector to the UK could be as much as 87 per cent lower than they would have been by 2030, leading to major job losses. In a more benign scenario they could still be down by about 50 per cent.

Parts of the beef and dairy sectors face a similar exposure. This is a potentially enormous blow to them and to rural Ireland.

Other sectors are exposed, too. Electrical-machinery exports, in areas such as computers, TVs and communications equipment, could face a 5 to 10 per cent hit, and a decline in exports from the pharma sector, given its huge size, could affect our GDP.

Wholesalers and retailers will face disruption as supply chains are ripped apart and higher costs passed on to Irish consumers. Aviation faces uncertain regulatory changes that could disrupt flights.

Five sectors – agrifood, electrical machinery, pharma, aviation and wholesale-retail – account for 90 per cent of the expected economic hit. Half of its comes from agrifood and pharma alone.

The real news from this report is putting numbers on the risks facing food. This sector not only needs free trade across the Border but also, much more importantly in cash terms, needs trade to be as free as possible across the Irish Sea. The Copenhagen report shows how difficult this will be to achieve.

1 Admission of mistake in Oxford vaccine dose raises doubts over reliability
2 ‘I don’t need to do any of this. . .I don’t actually need to work.’
3 Anti-alcohol zeal of public health experts peppers reopening debate
4 Same Brexit stumbling blocks persist as Barnier travels to London
5 White knights or loan book cannibals – what will happen at Ulster Bank?
6 Move to EU or face disruption, City of London is warned
7 Deutsche Bank’s head of accounting under investigation over Wirecard
8 Pandemic brings a halt to Zara-owner’s Irish expansion
9 AIB revives €1bn-plus problem mortgages sale
10 Oxford-AstraZeneca vaccine may be trialled again to prove results were ‘not a mistake’
Real news has value SUBSCRIBE